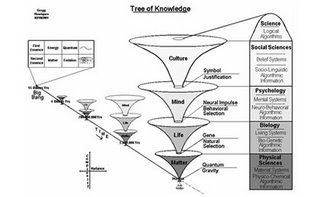 There is an interesting endeavor going on at PsyBlog to document the unity of psychology journey and current issues.

I got hooked to the same as I am also currently reading Consillience by E. O. Wilson and thus on the lookout for unified theories. Thanks to Mind Hacks via which I discovered this thread.

As per the Tree of Knowledge of Henriques, Psychology (on the mind plane) sits between Biology (on the life plane) and social Sciences (on the culture plane). He bridges the efforts of Skinner (towards the biological end of the spectrum) with Freud (towards the sociological end) as under the umbrella of psychological domain.

What interests me, is my own obsession at the two ends of the spectrum. While the Cognitive Map and research of Tolman seems to me a marking phase in psychology where behaviorism led way to the more cognitive approaches belonging to psychology proper; I am also intrigued by Conceptual Metaphors and linguistics which sits at the intersection of psychological phenomenon like thoughts and cultural phenomenon like language and its effects (the sapir-whorf hypothesis).

Hopefully my idiosyncratic tastes in Psychology would help the readers onwards on their own journey of unifying the Psychological stream of inquiry.