Artificial Neural Networks have historically focussed on modeling the brain as a collection of interconnected neurons. The individual neurons aggregate inputs and either produce an on/off output based on threshold values or produce a more complex output as a linear or sigmoid function of their inputs. The output of one neuron may go to several other neurons. 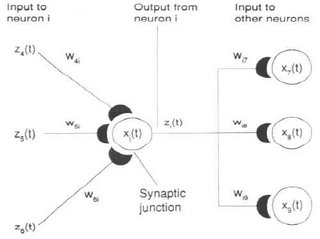 Learning consists of the determination of correct weights that need to be assigned to solve the problem; i.e. to produce a desired output, given a particular input. This weight adjustment mimics the increase or decrease of synaptic strengths due to learning. Learning may also be established by manipulating the threshold required by the neuron for firing. This mimics the concept of long term potentiation (LTP). 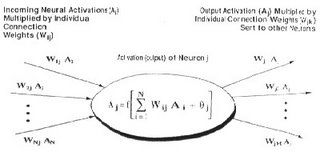 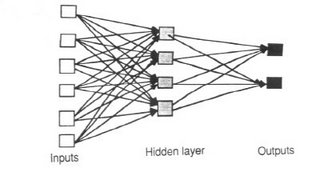 This model is a very nice replication of the actual neurons and neuronal computation, but it ignores some of the other relevant features of actual neurons:

2. Not all neuronal activity is due to external ‘inputs’. Many brain regions show spontaneous activity, in the absence of any external stimulus. This is not generally factored in. We need a model of brain that takes into account the spontaneous ‘noise’ that is present in the brain, and how an external ‘signal’ is perceived in this ‘noise’. Moreover, we need a model for what purpose does this ‘noise’ serve?

3. This model mimics the classical conditioning paradigm, whereby learning is conceptualized in terms of input-output relationships or stimulus-response associations. It fails to throw any light on many operant phenomenon and activity, where behavior or response is spontaneously generated and learning consist in the increase\decrease \ extinction of the timing and frequency of that behavior as a result of a history of reinforcement. This type of learning accounts for the majority of behavior in which we are most interested- the behavior that is goal directed and the behavior that is time and context and state-dependent. The fact that a food stimulus, will not always result in a response ‘eat’, but is mediated by factors like the state (hunger) of the organism, time-of-day etc. is not explainable by the current models.

4. The concept of time, durations and how to tune the motor output as per strict timing requirements has largely been an unexplored area. While episodic learning and memory may be relatively easier to model in the existing ANNs, its my hunch that endowing them with a procedural memory would be well nigh impossible using existing models.

Over a series of posts, I would try to tackle these problems by enhancing the existing neural networks by incorporating some new features into it, that are consistent with our existing knowledge about actual neurons.

First, I propose to have a time-threshold in each neural unit. This time-threshold signifies the duration in which temporal summation is applicable and takes place. All inputs signals, that are received within this time duration, either from repeated firing of the same input neuron or from time-displaced firings of different input neurons, are added together as per the normal input weights and if at any time this reaches above the normal threshold-for-firing, then the neuron fires. This has combined both temporal and spatial summation concepts. With temporal summation, we have an extra parameter- the time duration for which the history of inputs needs to be taken into account.

All neurons will also have a very short-term memory, in the sense that they would be able to remember the strengths of the inputs signals that they have received in the near past , that is in the range of the typical time-thresholds that are set for them. This time-threshold can typically be in milliseconds.

Each time a neuron receives an input, it starts a timer. This timer would run for a very small duration encoded as the time-threshold for that neuron. Till the time this timer is running and has not expired, the input signal is available to the neuron for calculation of total input strength and for deciding whether to fire or not. As soon as the timer expires, the memory of the associated input is erased from the neurons memory and that particular input would no longer be able to affect any future firing of the neuron.

All timers as well as the memory of associated input signals are erased after each successful neural firing (every time the neuron generates an action potential). After each firing, the neuron starts from afresh and starts accumulating and aggregating the inputs it receives thereafter in the time-threshold window that is associated with it.

Of course there could be variations to this. Just like spatial aggregation/firing need not be an either/or decision based on a threshold; the temporal aggregation/ firing need not be an either-or decision: one could have liner or sigmoid functions of time that modulate the input signal strength based on the time that has elapsed. One particular candidate mechanism could be a radioactive decay function, that decreases the input signal strength by half after each half-life. Here, the half-life is equivalent to the concept of a time-threshold. While in the case of time-threshold, after a signal arrives, and once the time-threshold has elapsed, then the input signal is not available to the neuron at all, and while the time-threshold had not elapsed the signal was available in its entirety; in the case of radioactive deacy the inpiut signal is available till infinity in theory; but the strength of the signal would get diminisehd by half after each half-life period; thus making the effects of the input signal negligible after a few half-lives. Of course in the radioactive case too, once the neuron has fired, all memory of that input would be erased and any half-life decay computations stopped.

These are not very far-fetched speculations and modeling the neural networks this way can lead to many interesting results.

Second, I propose to have some ‘clocks’ or ‘periodic oscillators’ in the network, that would be generating spontaneous outputs after a pre-determined time and irrespective of any inputs. Even one such clock is sufficient for our discussions. Such a clock or oscillator system is not difficulty to envisage or conceive. We just need a non-random, deterministic delay in the transmission of signals from one neuron to the other. There do exist systems in the brain that delay the signals, but leaving aside such specialized systems, even a normal synaptic transmission along an axon between two neurons, would suffer from some deterministic delay based on the time it takes the signal to travel down the axon length and assuming that no changes in myelination takes place over time, so that the speed of transmission is constant.

In such a scenario, the time it takes for a signal to reach the other neuron, is held constant over time. (Note that this time may be different for different neuron pairs based on both the axon lengths involved and the associated myelination, but would be same for the same neuron pair over time). Suppose that both the neurons have very long, unmyelinated axons and that these axons are equal in length and provide inputs to each other. Further suppose that both the neurons do not have any other inputs , though each may send its output to many other neurons.

We of course have to assume that somehow, the system was first put in motion: someone caused the first neuron to fire initially (this could not be other neurons, as we have assumed that this oscillator pair has no external input signals) and after that it is a self-sustaining clock with neuron 1 and neuron 2 both firing regularly at 10 ms intervals but in opposite phases. We just need GOD to initally fire the first neuron (the park of life) and thereafter we do have a periodic spontaneous activity in the system.

Thirdly, I propose that this ‘clock’, along with the concept of temporal summations, is able to calculate and code any arbitrary time duration and any arbitrary time dependent behavior, but in particular any periodic or sate/ goal based behavior. I’ve already discussed some of this in my previous posts and elaborate more in subsequent posts.

For now, some elementary tantalizing facts.

1. Given a 10 ms clock and a neuron capable of temporal summation over 50 ms duration, we can have a 50 ms clock: The neuron has the sole input as the output of the 10ms clock. After every 50 ms, it would have accumulated 5 signals in its memory. If the threshold-for-firing of the neuron is set such that it only fires if it has received five time the signal strength that is outputted by the 10 ms clock , then this neuron will fire after very 50 ms. This neuron would generate a periodic output after every 50 ms and implements a 50 ms clock.

2. Given a 10 ms clock and a neuron capable of temporal summation over 40 ms, (or lets have the original 50 ms time-threshold neuron, but set its threshold-for-firing to 4 times the output strength of the 10 ms clock neuron) , using the same mechanism as defined above, we can have a 40 ms clock.

3. Given a 40 ms clock, a 50 ms clock and a neuron that does not do temporal summation, we can have a 2000 ms clock. The sole inputs to the neuron implementing the 2000 ms clock are the outputs of the 50 ms and the 40 ms clock. This neuron does not do temporal summation. Its threshold for firing is purely spatial and it fires only if it simultaneously receives a signal strength that is equal to or greater than the combined output signal strength of 50ms and 40 ms neuron. It is easy to see, that if we assume that the 50 ms and 40 ms neurons are firing in phase, then only after every 2000 ms would the signals from the two neurons arrive at the same time for this 2000ms clock. Viola, we have 2000 ms clock. After this, I assume, its clear that the sky is the limit as to the arbitrariness of the duration that we can code for.

Lastly, learning consists of changing the temporal thresholds associated with a neuron, so that any arbitrary schedule can be associated with a behavior, based on the history of reinforcement. After the training phase, the organism would exhibit spontaneous behavior that follows a schedule and could learn novel schedules for novel behaviors (transfer of learning).

To me all this seems very groundbreaking theorizing and I am not aware of how and whether these suggestions/ concepts have been incorporated in existing Neural Networks. Some temporal discussions I could find here. If anyone is aware of such research , do let me know via comments or by dropping a mail. I would be very grateful. I am especially intrigued by this paper (I have access to abstract only) and the application of temporal summation concepts to hypothalamic reward functions.