Last week, on the blog action day, I re posted one of my earlier posts that questioned Kanazawa’s assertion that IQ causes Longevity (and implicitly that low IQ causes Poverty and not the other way round) and that SES has no effect on longevity net of IQ.  That has been thoroughly dealt with earlier and I will not readdress the issue; suffice it to say that I believe (and think that I have evidence on my side) that shows that in low SES conditions, a Low SES does not lead to full flowering of genetic Intelligence potential and is thus a leading cause of low IQ amongst low SES populations. This Low IQ that is a result of Low SES also gets correlated to longevity; again which would be largely explained by the low SES of the person. But as Low SES leads to less longevity and less IQ , a correlation between IQ and Longevity would also be expected.

A similar issue has cropped up , this time with respect to religion or belief in God. It has been claimed that high IQ  causes atheism and that low IQ leads to superstition and belief in God. The result, this time by Lynn’s team is again correlational in nature and just like Kanazawa’s study partially relies on Macro-data i.e. mean IQ of a country and its mean religious belief scores.
The abstract of the paper goes like:

Now, BHA science group , has written a  very good rebuttal to this proposition and I urge readers to go and read the discussion there in full.
For the sake of completeness, let me summarize the case against the hypothesis that high IQ causes atheism. 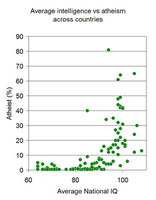 Problems with the macro data on which this analysis is made:  for countries that have about 100 (average) mean IQ, the correlation does not hold. The correlation is mainly an artifact of the fact that low mean IQ countries also have high religious belief (see accompanying figure) . We can, in my opinion, thus restrict the discussion to low (mean) IQ countries and try to explain whether its the Low mean IQ of their people that causes religiosity; or that high religiosity somehow leads to low IQ (a very counter-intuitive though indeed); or more plausibly that some other factor like SES/ feelings of control may be the underlying reason for both low IQ and high religiosity.
Now, I have shown elsewhere that low SES causes low IQ and not the other way round; what remains to be shown is that low SES also causes religious faith.
The latter part I’ll like to break in two parts: first , I believe that it is intuitive and there would be wealth of data showing that poverty or Low SES leads to fellings of helplessness or feelings of loss of control. Thus , the first assertion is that low mean SES in these countries, leads to the average person feeling less in control of his/her life and thus to feelings of loss of control.
The second part of the argument is that low feelings of control lead to religiosity/ superstition. Again I too have touched this before, but would right now like to point to this recent study that found that feelings of loss of control, lead to magical thinking/ superstitious belief and by extension (I am indeed taking a leap here) propensity towards religiosity. Of course we all know that religion is the opium of the masses (which are usaully poor) and rightly subdues the pwoerlessness and lack of control feelings that are otherwise unbearable.
Thus, I rest my case,  claiming that it is the low SES that leads to low IQ and high religious beliefs; the effect being mediated by nutritional/ enriched environmental factors in the former (IQ) case, while that of religion being mediated by feelings of control in the latter case. The actual correlation observed between IQ and religious faith , on the basis of low SES data , is at best spurious and due to the underlying low SES effects.

1 thought on “IQ and Religion: is the relation mediated by wealth and feelings of control?”