There is a recent article in New Scientist about consciousness and its neural correlates and the article focuses on work of Stanislas Deheane and his colleagues and how they are trying to get evidence and proof for the Global workspace theory of consciousness as proposed by Beranrd Baars.

That led me to this excellent article by Raphaël Gaillard that uses iEEG (intracranial EEG) using electrodes placed in brain, but not doing single-cell recording but still working on aggregates but at a much higher spatial and temporal resolution than normal extra-cranial EEG. They used electrodes placed in epileptic patients undergoing surgery and determined the difference in neural activity during conscious and unconscious access. 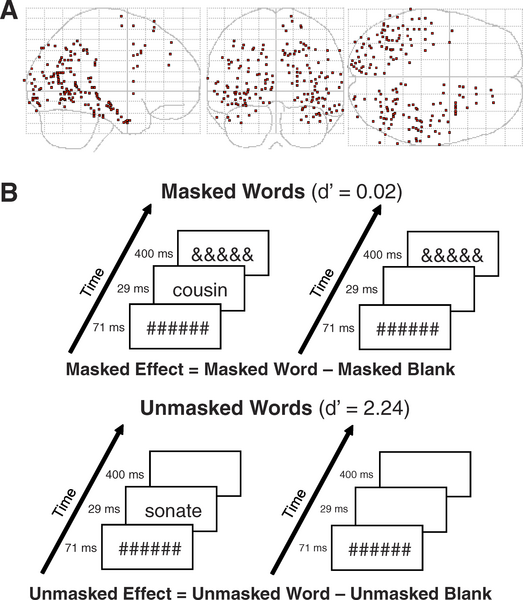 For differentiating between the unconscious and conscious access they used the popular visual masking paradigm, whereby a target word is presented and then immediately afterwords (after a few ms only) a mask is presented; if the duration of stimuli presentation is less and it is immediately followed by a mask, then though the stimulus is processed unconsciously, it is not available for verbal report and is not processed consciously. In contrast, in the unmasked condition, the target is not followed by a mask and hence is available for conscious access. In the present experiment, the authors used a forward as well as a backward mask and also had a condition whereby a blank screen was present instead of target ; so that effects of processing target alone could be determined after subtracting the effect of masks. the paper is one access and very lucidly written so go have a look!

A quick detour: Bernard Baars global workspace theory posits that consciousness arises when neural representations of external stimuli, are made available wide spread to global areas of the brain and not restricted to the originating local areas. This has also been characterized as an attentional spotlight and whatever comes under the spotlight in global workspace, is widely visible to the rest of the audience (the other parts of the brain) and also gives rise to consciousness. In the absence of coming to focal awareness(spotlight), the processing/representation happens unconsciously by the many different parallel brain modules. Thus, while unconscious representations may arise in brain locally, to become conscious they need to become widespread and available to the entire (or most of) the brain. To boot:

We adopted a theory-driven approach, trying to test experimentally a set of explicit predictions derived from the global workspace model of conscious access. This model, in part inspired from Bernard Baars’ theory [30], proposes that at any given time, many modular cerebral networks are active in parallel and process information in an unconscious manner [22,23,31,32]. Incoming visual information becomes conscious, however, if and only if the three following conditions are met [23]: Condition 1: information must be explicitly represented by the neuronal firing of perceptual networks located in visual cortical areas coding for the specific features of the conscious percept. Condition 2: this neuronal representation must reach a minimal threshold of duration and intensity necessary for access to a second stage of processing, associated with a distributed cortical network involved in particular parietal and prefrontal cortices. Condition 3: through joint bottom-up propagation and top-down attentional amplification, the ensuing brain-scale neural assembly must “ignite” into a self-sustained reverberant state of coherent activity that involves many neurons distributed throughout the brain.

Based on this theoretical framework, the following hypothesis were developed:

Prediction 1: a common early stage of processing.
Both masked and unmasked words should evoke similar neural activity within an early time window, reflecting a fast feedforward sweep propagating from posterior to anterior cortices. In particular, invisible masked words should induce transient event-related responses along the ventral visual pathway, as assessed by iERPs and ERSP.

Prediction 2: a temporal divergence.
Following this initial common stage, only unmasked words should be associated with sustained effects. We thus predict a divergence in cortical activation for unmasked and masked words. Given that we contrasted heavily masked stimuli with unmasked stimuli, we expect a progressive buildup of the divergence between these two conditions. In the light of recent high-resolution scalp electroencephalogram (EEG) studies in visual masking and attentional blink paradigms, this temporal divergence is expected to occur within a 200–500-ms window [1,2].

Prediction 3: an anatomical divergence.
The activation of frontal and parietal areas, which are allegedly dense in global workspace neurons, should be particularly sensitive to consciously perceived words (see [32] and Figure 1 of [22] for explicit simulations of this property). Although masked words may cause a small, transient and local activation within these regions, we predict that unmasked words should elicit a global and long-lasting activation of these regions, corresponding to a broadcasting process.

Prediction 4: phase synchrony and causality.
During this late time window, the long-lasting and long-distance neuronal assembly specific to conscious processing should be associated with an intense increase in bidirectional interelectrode communication. Measures of phase synchrony and Granger causality should be particularly apt at capturing this phenomenon. 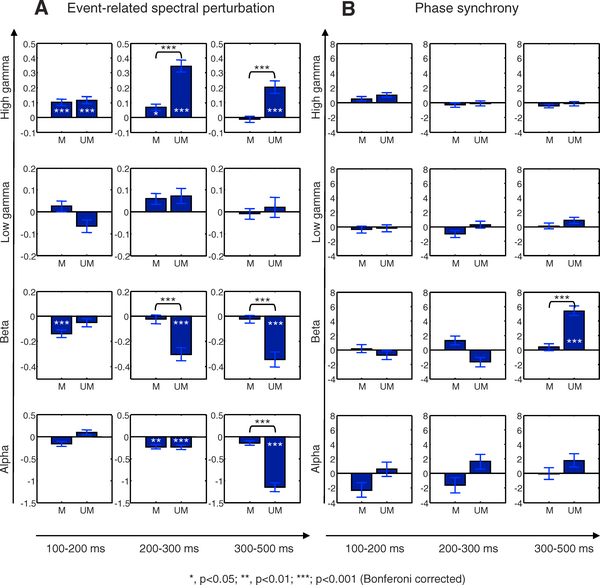 This is how the authors conclude:

Our results suggest that in the search for neural correlates of consciousness, time-domain, frequency-domain, and causality-based electrophysiological measures should not be seen as competing possibilities. Rather, all of these measures may provide distinct glimpses into the same distributed state of long-distance reverberation. Indeed, it seems to be the convergence of these measures in a late time window, rather than the mere presence of any single one of them, that best characterizes conscious trials.

That brings me back to the new scientist article:

Dehaene’s group had already shown that distant areas of the brain are connected to each other and, importantly, that these connections are especially dense in the prefrontal, cingulate and parietal regions of the cortex, which are involved in processes like planning and reasoning.

Considering Baars’s theory, the team suggested that these long-distance connections may be the architecture that links the many separate regions together during conscious experience. “So, you may have multiple local processes, but a single global conscious state,” says Dehaene. If so, the areas with especially dense connections would be prime candidates for key regions in the global workspace.

Now it is well known that in autism there are more local connections and more local processing; while psychosis/ schizophrenia spectrum is marked by more long-distance connections/ activity. If so , it is not unreasonable to conclude that psychotics may have higher p-conscious experiences while autistics may be stuck at more lower A-conscious experiences. I proposed something like that in my post titled ‘what it is like to be a zombie‘ and you are strongly encouraged to go read it now.

Further we also know that default mode network is highly activated in psychosis and very less in activity in autistics and that is again converging proof. From the new scientist article:

Certain regions of the brain’s global workspace, dubbed the default mode network (DMN), are active even when we are resting and not concentrating on any particular task. If the global workspace really is essential for conscious perception, Laureys’s team predicted that the activity of the DMN should be greatest in healthy volunteers and in people with locked-in-syndrome, who are conscious but can only move their eyes, and much less active in minimally conscious patients. Those in a vegetative state or in a coma should have even less activity in the DMN.

The researchers found just that when they scanned the brains of 14 people with brain damage and 14 healthy volunteers using fMRI. In a paper published in December 2009, they showed that the activity of the DMN dropped exponentially starting with healthy volunteers right down to those in a vegetative state (Brain, vol 133, p 161). “The difference between minimally conscious and vegetative state is not easy to make on the bedside and four times out of 10 we may get it wrong,” he says. “So this could be of diagnostic value.”

While the DMN may be important marker for brain damaged patients, it also has the potential to become a marker for different feels of consciousness sin brain intact but differently wired brains like those of autistics and psychotics.

If autistics have more local processing, then perhaps they should be better at tasks involving unconscious stimuli: perhaps that’s why despite their savantic abilities , much of what happens in the autistic mind is not only non-verbal , but also non-conscious and hence not juts not available for verbal report, but not accessible to consciousness.

I strongly feel that adding the consciousness dimension to autism/schizophrenia spectrum may be a good thing and lead to more clarity and new directions in research.

3 thoughts on “Neural correlates of conscious access: implications for autism/psychosis”