It has been evident for quite some time that there is a connection between insanity (especially bipolar/schizophrenia spectrum) and creativity , especially as evidenced by the creative bent of schizotypal people. See for example this article covering a recent study that looks at exactly the same issue. However, most of these studies rely on a unitary construct of creativity that does not do full justice to the correlations that could be found if convergent and divergent creativity was distinguished and effect of intelligence was factored out. The new study by Hommel, B. does just that.

Schizophrenia/psychosis as many will know from their elementary neuroscience knowledge is associated with dopamine dysfunction; specifically it is believed that high baseline dopamine levels are there in schizophrenics/psychotics. So it was not unreasonable for Hommel et al to hypothesize that dopamine should have some relation with creativity possible higher dopamine associated with high creativity. However, dopamine has shown an inverse U relation for many other factors and thus they were cautious and tried to fit both linear and quadratic graphs to their data. But we are moving ahead of ourselves. Before they could find the underlying relation between dopamine and creativity, they had to measure these things accurately.

They measured dopamine using Eye Blink Rate (EBR): that is how many time you blink in a minute. For creativity , they measured Convergent Creativity using a remote association task (don’t go by the name …the task has only one answer and measures convergent thinking) . for eg. a subject is given three words (say time, hair, stretch) and have to come up with a word that is commonly related to all three (answer: long) . this reliably measures creativity but of he convergent type. For Divergent thinking , they administered the Alternate Uses task (AUT),a task that requires one tocome up with novel uses of everyday objects like brick, toothpaste etc. The responses to AUT were further coded for fluency (how easily one could come up with alternatives measured by total no. of responses) , flexibility(the number of different categories used or how remote the mind wandered) and elaboration (the level of detail surrounding the use). They also measured fluid intelligence using Raven’s progressive matrices.

They then conducted experiments (administered the tests to subjects) , collected data and analyzed the results. The main findings of interest to us is that they found a inverse u shaped relation between dopamine (EBR) and flexibility dimension fo divergent thinking. This effect was present even when the effect of intelligence was factored out. thus both low dopamine, as well as too much dopamine is detrimental to flexible divergent thinking/creativity and schizotypals , placed precariously between normals and psychotics are best placed to be the most creative as they presumably have the optimum dopamine levels. the authors also argue that schizophrenics dopamine levels should not be brought down indiscreetly by using anti-psychotics (which reduce dopamine levels) but they should be brought in the optimum range of dopamine functioning. this obviously has immense importance and treatment implications. No wonder creative people feel stiffed when on anti-psychotics- their dopamine levels are being brought down way too much. 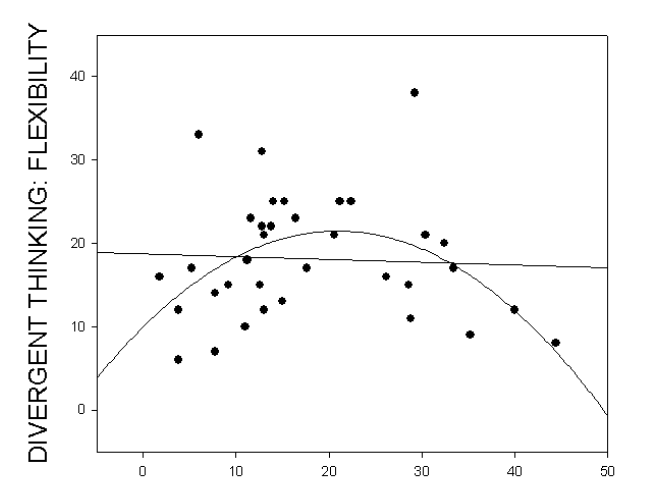 Overall, a view of how brains and bonkers are two sides of the same coin is emerging and it is exciting to note that many previous inconsistencies in literature around this issue may have to do with not differentiating and decomposing creativity into its many components and not looking for inverse u shaped effects.

2 thoughts on “The Creativity-dopamine (b)linkage: more brains and bonkers connections”