This post originally appeared on my Psychology Today blog “The Fundamental Four” on 15th Dec. 2011.  This is cross-posted from there.

Abundant evidence exists that psychosis is more prevalent in urban areas as compared to rural areas. The fact that living in the city makes one vulnerable to psychosis is not up for debate – but healthy debate ensues about the mediating mechanisms.
Last year, Zammit et al claimed that the high incidence of psychosis in urban settings is a result of greater social fragmentation in urban areas.
Today I came across a study [pdf] that had nothing to do with psychosis and came up with this novel hypothesis that the mediating mechanism may be global versus local focus or processing style. If that seems farfetched, bear with me for a while.
First a bit of background, the new study was referenced by Christian Jarrett in a BPS research digest blog post in which he lucidly shows that it has been found that living in urban areas has been found to be associated with a propensity for global processing style (seeing the forest); while living in rural areas has been found to be associated with a local processing style (focusing on the trees and missing the forest).

The study itself is pretty straight forward; in one of the local/global task it used the famous Ebbinghaus illusion (see image) to measure the amount of bias towards global vis-a-vis local processing.

In the second task it used large, composite (global) shapes/letters made of small, parts (local) which were also themselves shapes/letters and then measured whether one was more drawn in making inferences/similarity based on global percepts or the local figurine. 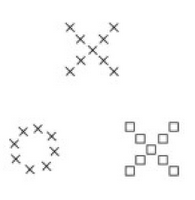 The study measured this global vs. local bias in Himba society (Namibia) members who had varying level of exposure to urban environments as well as Japanese and British urbanites. What they found was that living in urban areas/ exposure to urban areas was significantly predictive of whether you would lean more towards more global mode of processing. The authors link this with more ‘visual clutter’ in the cities necessitating a global style of processing.
Christian mentions in passing the fact that autistic people have a very local bias of processing and are marked by weak central coherence; what he perhaps doesn’t realize is that psychotics, which have been conceptualized to lie diametrically opposed on a continuum from autistic, have a global processing bias and a strong central coherence.
Badcock and Crespi, and I even before them, have been crying from the rooftops to conceptualize psychosis and autism as diametrical disorders – and some investigators have paid heed. Suzzana N et al [pdf] have recently shown that as conceptualized by Badcock and Crespi , Autistics and Psychotics are actually at opposed ends of local vs global processing.

We refer particularly to Crespi and Badcock (2008), who make the novel claim that the autism and positive schizophrenia spectra are diametrically opposed. They argue that individuals with autistic traits and individuals with positive symptoms of schizophrenia (e.g., magical ideation, unusual perceptual experiences and paranoia) should exhibit opposite cognitive profiles. The current investigation focuses specifically on their claim that autistic and positive schizophrenia traits contrastingly affect preference for local (i.e., piecemeal) versus global (i.e., integrative) processing.

And this is exactly what they found. They used an embedded figural task to assess the global vs. Local bias and their results showed that indeed psychosis prone individuals had a more global style of processing.

Now one thing I am good at is putting two and two together and the moment I saw the new study correlating global style with urban living, a lot of pieces fell into place. Form the above it is apparent that global processing style may be an intermediate mediating factor that leads to association between urban living and psychosis.

What neural mechanism may be involved?

To quote from the Suzzana et al paper again:

While genomic imprinting may be one mechanism, maybe there is something about exposure to urban environments (maybe it’s ‘visual clutter’) that also has a similar effect on pruning of synapses and unduly affect local pruning at the cost of pruning between widely separated regions thus leading to global processing bias.

Instructive to pause here and note that in children they start with local bias and around 6 year of age revert to global bias that adults typically have and this is mediated by synaptic pruning. See this open access PLOS one article.

Thus, it seems Psychosis and the City are intimately connected; and that, this is because, to live in a city, you need to (de)focus on ‘the big picture’.

1 thought on “Psychosis and the City”