A new study by Ruthsatz and Urbach is doing the rounds nowadays. That study has nothing to do with Autism or ADHD per se. The study focuses on child prodigies and finds that they have high levels of intelligence, enhanced working memory and that they pay attention to details.

What the study also found was high level of autistic relatives and high scores on Autism spectrum for the prodigies. The relation between autism and prodigiousness was mediated by the endo-phenotype ‘paying attention to detail’ and none of the other symptoms of ASD seemed to play a role.

Many savants also are high on ASD and have exception working as well as long term memory. There too they pay excessive attention to details and are fascinated by speical interests.

On the other hand there is gathering literature that suggests that the ADHD kid is basically on the creative side of the spectrum – restless, trying multiple strategies,  having diffused and peripheral attention, and to an extent novelty and sensation seeking.

Also, if one thinks about that for a minute, autism and ADHD seem to be opposed on a number of dimensions. The three basic features of ADHD are 1) inattentiveness and distractibility vs  too much focus and fascination for an object shown by Autistic kid 2) impulsiveness vs restricted and repetitive motions and interests of the autistic kid and finally 3) hyperactivity vs restrained interactions and communications of the autistic kid.

There is also some data from fly models that suggest that autism and ADHD are opposites in a sense.

Another popular theory of autism posits that it arises primarily due to ‘weak central coherence’, or inability to see the context/ gestalt/ ‘the big picture’. The ADHD kid on the other hand is hypothesized to use a lot of peripheral attention and daydreams missing what is being centrally taught in the classroom.

Some clarifications are due here. I believe ADHD to fall on the psychotic spectrum and have been proposing the autism and psychosis as opposites on a continuum model for close to eternity.

Also, when I say global/local processing styles I dont restrict the application to perception alone, but extend it to include cognitive style too. 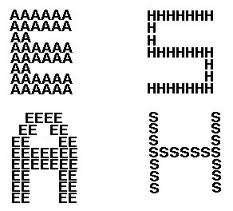 There is a lot of work that has been done on global/ local processing styles with respect to perception, using Navon letter tasks and it is fairly established that normally people lean towards the global processing style.

It is instructive to pause and note here that psychosis is associated with a global processing style while autism with attention to details.

It is also instructive to pause and note that similar to autism-psychosis continuum , it seems Intelligence and creativity are also in a sense opposed to each other. Also while creativity  is associated with broad cognitive style that is divergent; intelligence is conceived of as narrow and focused application of abilities.

The romantic notion that psychosis is the price for creativity may not be untrue.

1 thought on “Autism and ADHD: the intelligent and the creative child!”