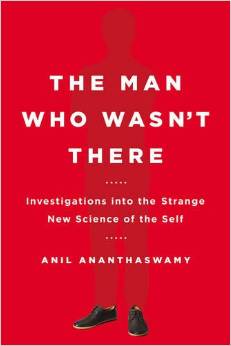 Can the Cotard’s syndrome tell us something about the self? A person suffering from Cotard’s syndrome is likely to claim that he/ she is dead- can such a delusional experience make us appreciate what self is what it isn’t – and more importantly how the sense of self can go awry in some phenomena?

Anil Ananthaswamy, in his exquisitely written book ‘ The Man Who Wasn’t There‘ beautifully illustrates how Cotard’s and other such weird and not so weird phenomena can shed light on the true nature of self (provided the self exists and there is something it is like to have a self- more about this later).

The book is beautifully written, weaving narratives of actual patients suffering from various disorders, with cutting edge research in the field and at all times tying it back to the nature of the self.

Although the eight chapters talk about eight different phenomena- ranging from Cotard’s to deperosnalisation to Autism to schizophrenia to out-of-body experiences and ecstatic epilepsy to BIID ( or having a desire to amputate ones limbs) and Alzheimer’s – there doesn’t seem any discontinuity- nor does it seem as if disparate phenomena are being talked about. With self being the focus, each of these is used to approach the self from a different angle.

I am reminded of the parable of  blind men and the elephant – whereby each blind men could only grasp one part of the elephant. Self is such an elephant in the room. The various chapters do advance our understanding of the self and fortunately, this time, the sum is greater than the sum of the parts, and we are indeed able to get a  sense of the elephant/self!

It would be naive to assume that Anil would have solved the problem of self where great philosophers or scientists of past and present have failed to do so- but he does gives tantalizing glimpses of what the answer might me and at least brings us up to speed with what is being thought of in the philosophical / scientific circles.

The power of the book comes from its very approachable and readable writings style and the humane treatment of its subjects.  Whether its the isolation felt by a BID sufferer who has no means of getting his limb amputated legally or the strangeness felt by those suffering from deperosnailsation, Anil makes the stories vivid- loud and clear in one’s mind;s eyes.

The book is also chock full of interesting facts- some of which I was already familiar with, but got an opportunity to brush up on the latest happenings in the filed, others were new to me – for example I hadn’t realized that people with Cotard’s are typically depressed or that people remember more about their life from between 10 and 30 years (the reminiscence bump) and many such nuggets.

The book is immensely readable and holds your attention from chapter to chapter.  I was almost felling bad about having finished it as I wanted more of the treats to continue.  In a week in which we lost Oliver Sacks, it takes some solace to discover that there are others who are keeping the tradition alive.

Both the erudition , humanity and narration of Anil is superb. While reading the book, I thought he was himself a prominent neuroscientist- its only post reading it I realized he is a science journalist and has also written  a best seller in physics. Surprising how brilliant people are able to make their mark in whatever field they chose to focus on. Quiet coincidentally I had also reviewed ‘Subliminal’ by Leonord Mlodinow- who is also a physicist but has written a good book rooted in psychology.

My advice to readers of this blog- if you loved Sacks, if you loved VS Ramachandran,  or even if you didn’t or haven’t heard about them, do give this book a read- you are going to love the easy style- yet a lot of substance. I, for one , am eagerly looking forward to Anil’s next read.