This post is an ambitious attempt to link the four causes delineated by Aristotle, to the four questions asked by Tinbergen to the four types of explanations that can be made for any human/animal ability.

First a bit of a background.

Aristotle had listed four causes – Material,  Efficient, Formal and Final causes. From the Wikipedia:
Aristotle held that there were four kinds of causes:

While studying these causes scholars have stressed on two sorts of distinctions, the first is the concept of actuality and potentiality– while some causes like the final cause (teeos or entelchiea) and formal cause (eidos or energiea) are actual; the material cause is deemed to be poetntial.

The other concept is that of Hylomorphism, or the distinction between matter and form. I believe that the four causes can be broken down along the two dimensions of potentiality/actuality and matter/form as below to lead to a 2×2 matrix of causes. 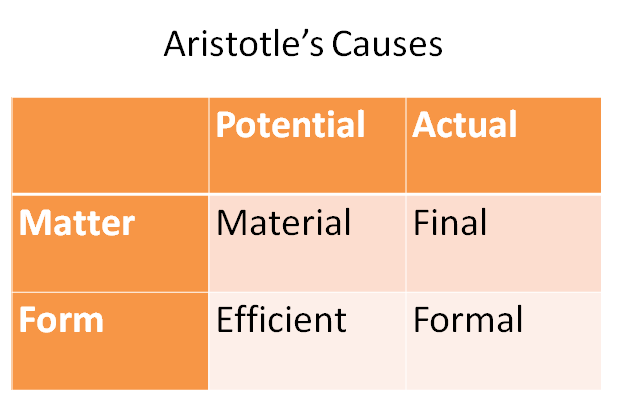 Niko Tinbergen , a great ethologist, asked four questions or explanations about any biological phenomenon, inspired by the Aristotle’s 4 causes. . From the Wikipedia page:

However, I like to arrange it slightly differently. I retain the ultimate/proximate distinction, but supplement it with Accidental/ Teleological distinction. Accidental to me means phylogeny due to random genetic drift and genetic baggage; and physiologic mechanisms like hormones etc kicked in accidentally by random interaction with immediate environment;  on the other hand the process of adaptation and developmental unfolding to an adult form (ontogeny)  appear purposeful and pseudo teleological. Thus my arrangement: 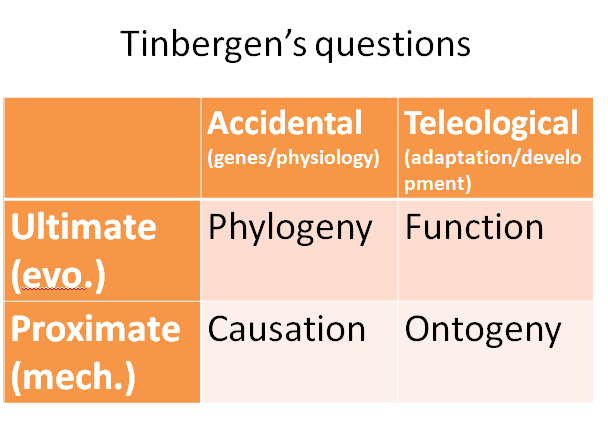 Which leads to how I became re- interested in these four causes recently- it was while reading an article by Dean Simonton on ability , wherein he conjectured that studying both the generic and specific factors that affect performance as well as acquisition of ability is problematic and non-fruitful, that I remembered about these and saw how fruitful it may be to conceptualize ability in just so many terms. Hence my conceptualization: 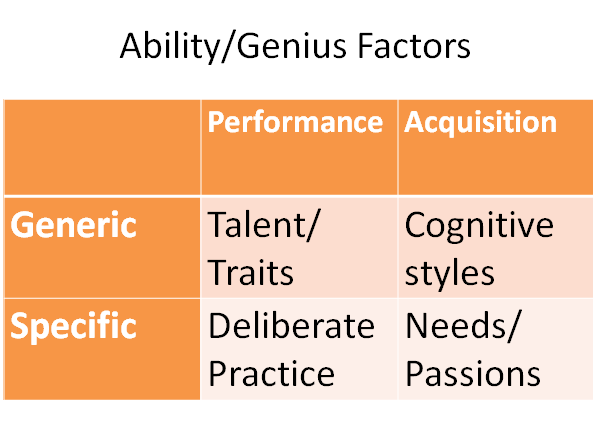 In general for ability I think the following four factors are applicable and all four have strong influences on ability; I have named them talent, hard work, grit and optimism etc elsewhere. In general for any trait like intelligence, emotionality etc I think the 2×2 factor matrix is relevant and worth keeping in mind. 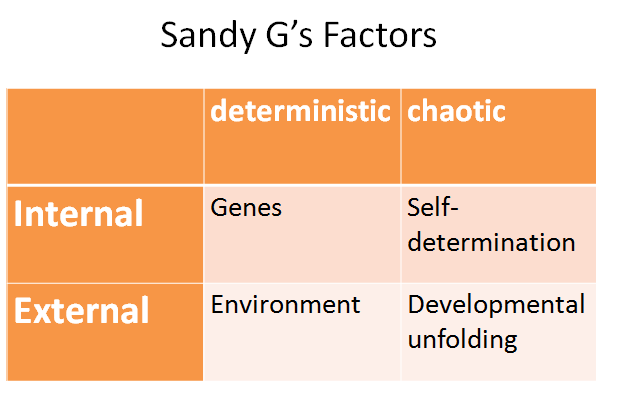 That brings me eventually to my own levels of explanations for any phenomenon. I believe evo-devo explanations as well as psycho-social factors have equal weight-age while explaining say behavior. while some of these explanations are mechanistic/deterministic other are of non-deterministic or chaotic origin. Similarly, while some are governed by factors internal to the organism others are mostly affected by extrinsic factors. 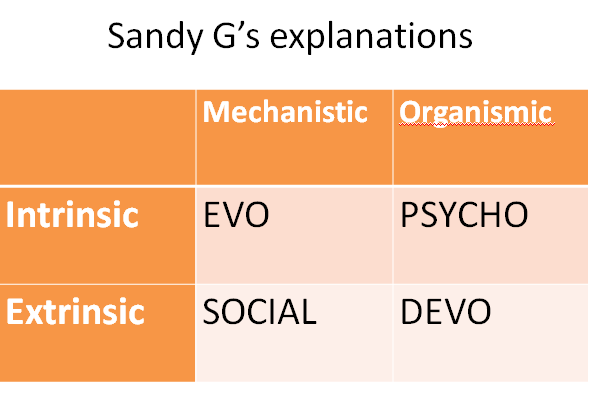 I hope the above conceptualization makes sense. It is inline with my eight stage model and four domains model where Evo is stage 1&2; social- stage 3&4, devo- stage 5&6 and psycho stage 7&8.