Continuing my theme of focusing on human character strengths and virtues and relating them to personality,  I have been doing more reading of the literature and want to discuss three papers today.

First up is Shyrack et al’s recent paper that again explores the factor structure of VIA-IS and finds support for a 3 or 4 factor solution. They discuss the various conflicting/mutually supporting factor analytical results and the resulting 4 or 5 underlying components or factors. the VIA-youth scale consistently gives 4 factors while the VIA-Is (adult form) gives 5 factors.

However, I have issues with the samples on which the factor analysis is done. the mean age in Shyrack’s current study was 50 years approx, but in most other analysis, the analysis is conducted on university students. The age and developmental stage of the sample is important because as per a developmental stage perspective many of the virtues will not become manifest/ apparent and bloom in full strength until a particular age has been reached. for eg, till age 50 people have perhaps mastered the first 6 stages (including intimacy as per Erikson’s model) but still have not finished to satisfaction the developmental tasks of generativity (seventh stage) and integrity (eights stage). Not faced with any developmental challenges to these situations, the people may have lacked incentives to develop the corresponding virtues; thus I would not be surprised if people identify / relate to only at most 6 virtues. I would suggest that new tests be developed for post middle age and senior citizens than the normal adult scales and their data analyzed to understand the true factor structure of virtue. This is akin to their being different measurement instruments for children, adolescents and adults for character strengths and perhaps rightly they reflect different underlying factors thus validating a developmental stages approach. If analyzed this way I am sure the data for aged people will support a eight factor structure. Much of the data obtained from college students, in my view would only support 4 or 5 factor virtue structure.

Shyrack et al find support for 3 or 4 factor model, but based on a cursory look at their extraction using goldberg technique (see figure) I can extrapolate that a support for eight factor structure , with social strengths splitting in justice and humanity, and temperance splitting in temperance proper (restraint) and emotional strength. I hope someone perofmrs extraction till 8 factors and tries to label them, especially with aged poulation. 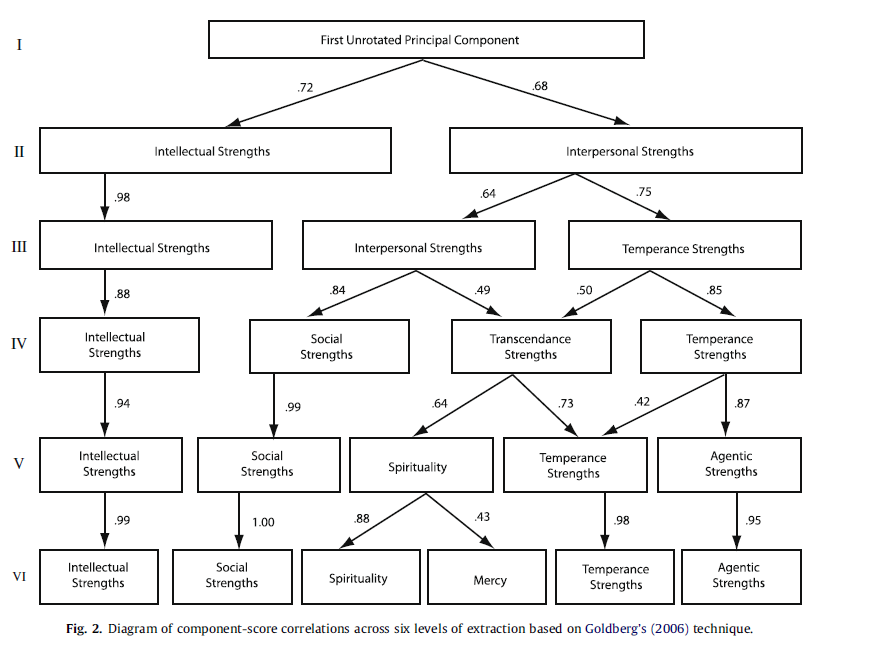 That bring me to Munro et al paper that also used undergraduate students as samples and performed factor analysis to come up with 5 factors ; however they also centered their data and after centration (to reduce social desirability effects). Their scree plot supported a 9 factor structure. See the scree plot that clearly shows at least eight factor (eigenvalues > 1) . to me it is not understandable why they left this centered data and instead went on to derive a five factor structure from the non-centered raw data. 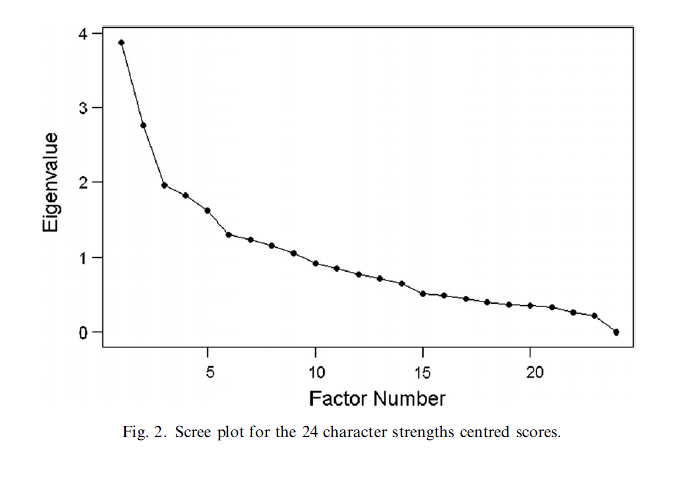 That brings me to the last paper. It is by Cawley et al and is based on lexical analysis of virtue adjectives and nouns and also uses a different Virtue scale the Virtue Scale instead of VIA-IS. This approach too yielded a found fold structure (Empathy, Order, Resourceful, Serenity), but I believe there is much scope for more exploration with their data. However the best take home from the very insightful article is that virtue and ethics are separate. Virtue is related to being; while ethics is related to doing. Ethics is more cognitively grounded , especially the one gauged by DIT or Kohlberg’s moral dilemmas and is not related much to virtue which is more grounded in character or personality. And they found support for this in their data. That I believe is an important difference an finding to keep in mind. Also I liked this paragraph that lists the attributes that give rise to moral domain competency. To me they follow naturally , as stage tasks and issues , in reverse order as one undergoes moral development:emotions (1st stage), will (second stage) , motivation (3rd stage), Ethics (4th stage) and Virtue (5th stage).

The independence of this measure of the virtues and the personality measures from the more cognitive DIT measure of moral development may also reflect the independence of the mental (cognitive±intellectual) and moral (emotional±motivational) domains in psychology and philosophy (Averill, 1980). Averill observes that the mental domain evolved from studies of epistemology, while the moral domain (including personality) evolved from studies of virtue ethics, motivation, will, and emotion. Thus, from Averill’s observation, one would expect a measure of virtue to be more strongly related to measures of personality than to measures of cognitive moral development. Additional empirical data on the relationships among virtue, personality, moral cognitive development, and epistemological style can be found in Cawley (1997).

Also, I liked this para, that distinguishes between temperance proper (2nd stage doing with restraint) and Activity (7th stage that is more agentic):

McCrae and John (1992) also acknowledge that there are two components of Conscientiousness (C): an inhibitive view and a proactive view. They note that:
A number of di?erent conceptions of C have been o?ered. Tellegen’s Constraint and Hogan’s Prudence re¯ect an inhibitive view of C as a dimension that holds impulsive behavior in check. Digman and Takemoto-Chock’s Will to Achieve represents a proactive view of C as a dimension that organizes and directs behavior. The term Conscientiousness combines both aspects, because it can mean either governed by conscience or diligent and thorough. Empirically, both kinds of traits seem to covary. (p.197)
Perhaps the virtues factor Order represents the inhibitive, non-impulsive aspect of Conscientiousness as a virtue, and the virtues factor Resourcefulness represents the proactive, diligent aspect of Conscientiousness as a virtue (see also Johnson & Ostendorf, 1993).

Overall, I highly recommend reading the Cawley et al paper (available freely on the web) and encourage more research that utilizes multiple approaches to correlating Virtues with other constructs as outlined in this bit from munro et al:

In addition to developing their classification system, Peterson and Seligman (2004) have also suggested how their classification of character strengths and virtues is related to, but distinct from, already established theories of values. For example, Peterson and Seligman (2004) see their classification of character strengths and virtues as being related toMaslow’s (1973) idea of self-actualised individuals, the Five FactorModel (FFM) of personality (McCrae & John, 1992; Costa & McCrae, 1994), Cawley’s virtue factors (Cawley,Martin, & Johnson, 2000), Buss’ evolutionary ideas about what is attractive in a mate [i.e. what character traits are essential for survival and propagation, (Botwin, Buss, & Shackelford, 1997; Shackelford, Schmitt, & Buss, 2005)], and Schwartz’s (1992) Universal Values.
Some research into establishing the validity of these claims has begun. Haslam, Bain, and Neal 2004) found that both Schwartz’s (1992) Universal Values and the Five Factor Model (FFM) of personality were conceptually linked to the 24 character strengths. However, as these constructs were defined and subsequently measured by only one or two terms that were ranked and grouped together by participants on the basis of conceptual likeness, more thorough research is needed before we can draw any firm conclusions.

Heer is toast to more such research!