There is an interesting post on Edie NeuroLearning Blog, that focuses on some recent findings that empathy/interpersonal perspective-taking is correlated with high activation in sensory-motor areas. This is as opposed to the baseline condition in which a third party or ‘bystander’ perspective is undertaken.

Of more interest to us here is the Robert Selman’s developmental stage theory of perspective-taking and how that relates to the Kohlberg’s Moral Development theory we have discussed earlier.

As per Robert Selman, the interpersonal perspective-taking or the related role-playing (stepping in someone else’s cognitive perspective) ability develops through distinct stages and he outlines five of them starting from undifferentiated perspectives in which one is not really able to distinguish between different perspectives to ‘bystander’ or third party perspectives tainted with social/cultural influences. 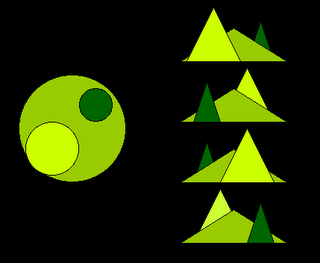 Before we proceed further, it is instructive to distinguish between perceptual perspective-taking or point-of-views as outlined by Piaget and more emotional-cognitive theory-of-mind perspectives as elaborated by Selman. The ‘impersonal’ point-of-view tasks that piaget used (for eg in the famous point-of-view task whereby a Christmas tree was obstructed from point of view by hills. See figure) rely more on whether one can literally see from the point of view of another person and is restricted to purely perceptual phenomenon. While egocentrism would correspond to undifferentiated perspective taking (stage 1) of Selman as it involves inability to distinguish one’s own perspective from those of others, Decntering would be akin to taking third party perspectives (stage 4) of Selman. Piaget’s decentration may be a necessary (but not sufficient say in the case of people with Autism) condition for the development of third-party perspectives stage of Selman.

Thus, in the ensuing discussion all references to perspective-taking would be in the theory-of-mind emotional-cognitive sense and not in purely perceptual terms.
Consider as an example a story presented to children who are then asked on what the protagonist would do and how others would react to it.

Holly is an 8-year old girl who likes to climb trees. She is the best tree climber in the neighborhood. One day while climbing a tree she falls off the bottom branch but does not hurt herself. Her father sees her fall, and is upset. He asks her to promise not to climb trees anymore, and Holly promises.

Later that day, Holly and her friends meet Sean. Sean’s kitten is caught up in a tree and cannot get down. Something has to be done right away or the kitten may fall. Holly is the only one who climbs trees well enough to reach the kitten and get it down, but she remembers her promise to her father

The first stage of Selman is based on Undifferentiated Perspective whereby one attributes one’s or protagonist perspective to everyone else’s. One may have a concept of perspective or Theory-of-mind but may suffer from an inability to attribute any other perspective to anyone else distinct from one’s own. Thus typical response are like “The child predicts that Holly will save the kitten because she does not want it to get hurt and believes that Holly’s father will feel just as she does about her climbing the tree: “Happy, he likes kittens”

This also relates to Kohlberg stage 1 in the sense that one comes to realize that one can have a ‘moral’ perspective on a subject. This ‘moral’ perspective though is undifferentiated from what the society has imposed in the form of rewards/ punishments . One confuses others moral perspective (father says this is right” with ones own “this is right” and sort of has an undifferentiated moral sense. Everyone should behave like this.

The second stage of Selman is the social-informational perspective whereby one comes to realize that not only there exits a perspective, but that it can be different for different persons. Nevertheless, despite the realization that the perspectives can differ ( based on say the different information that each may have) the preponderant tendency is to consider one’s perspective as valid and by exchanging information attempts to make others perspective inline with one’s own. Thus a typical response may be ” When asked how Holly’s father will react when he finds out that she climbed the tree, the child responds, “If he didn’t know anything about the kitten, he would be angry. But if Holly shows him the kitten, he might change his mind.” The attitude is typical of a person who realizes that someone may have a different perspective, but that perspective is not valid and is due to lack of information.

The third stage of Selman is marked by self-reflective perspective taking which marks the first empathetic perspective taking whereby one sees, thinks and feels from other person’s perspectives using first person. This is literally stepping in someone else’s shoes and truly seeing as if the situation concerned oneself. This not just a logical realization that someone can have a different perspective but also realizing that that perspective can be equally valid given the other person’s unique situation. Thus one thinks and feels like the other person and can both suffer and enjoy the outcomes of situations as they unfold from the other person’s perspective. The emphasis is on understanding. And empathy. Thus the typical responses like ” When asked whether Holly thinks she will be punished, the child says, “No. Holly knows that her father will understand why she climbed the tree.” This response assumes that Holly’s point of view is influenced by her father being able to “step in her shoes” and understand why she saved the kitten. “

This too relates well with Kohlberg’s third stage marked by interpersonal relations. When one has developed empathy and understanding, one is guided by ensuring that the dealings are ethical in the sense that they make people feel good , enable one to be viewed favorably by others (realized as a good and genuine person) and generally lead to good relations. Empathy and understanding leads to valuation of individuals as similar to oneself and thus equally valuable. All moral/ethical conduct is guided by the dictum of good outcomes and relations between all (and especially those closely empathized with) parties concerned.

The fourth stage of selman becomes possible by the appearance of third-party or ‘bystander’ perspectives whereby one has decentred in the emotional/cognitive personal sense and can see a situation not only from first and second person perspectives of interacting parties, but also from that of a neutral bystander. This includes the ability to keep multiple perspectives in mind at the same time. One does not see from this perspective and then from the other – one looks at the entire big picture or view and understands that different people are having different perspectives. Thus typical responses include “ When asked whether Holly should be punished, the child says, “No, because Holly thought it was important to save the kitten. But she also knows that her father told her not to climb the tree. So she’d only think she shouldn’t be punished if she could get her father to understand why she had to climb the tree.” This response steps outside the immediate situation to view both Holly’s and her father’s perspectives simultaneously. “

This also relates closely to the Kohlberg’s fourth stage marked by conventional focus on social order. The ability to keep multiple ‘moral’ perspectives in mind at the same time and the ability to abstract and construct a big picture from these perspectives enables one to come up with the concept of the social morality, or morality that is not governed by different moral perspectives of the participating actors, but is based on the effects these acting persons have on the big picture, the social fabric. Thus the criteria of any ethical actions is adjudged as to how it influences the social fabric – does it lead to maintenance of social order- the third party neutral moral playground and its rules – or is it subversive to it. This is as opposed to the earlier ethical thought and action based on interpersonal focus on individual’s morality. The stage now becomes more important than the actors.

The fifth stage of Selman derives form maturation of this to a societal perspective, whereby one realizes that the neutral third party perspective is not really neutral but influenced by the societal and cultural context in which the bystander lives and is reflective of those values. One realizes that one can have different neutral perspectives on a situation, each of which would be colored by the values that are dear to the social and cultural context in which the situation occurs and which dictate what a neutral perspective is. One may realize that some values are desirable and others are not and that the perspective that is informed by desirable values is more preferable. The typical response thus are “When asked if Holly should be punished, the individual responds, “No. The value of humane treatment of animals justifies Holly’s action. Her father’s appreciation of this value will lead him not to punish her.”

This too corresponds well with Kohlberg’s fifth stage with the emphasis on Social Contracts and individual rights. When one realizes that the neutral third party perspectives cannot be neutral with respect to the fundamental values and human (or cat in our example) rights that inform such perspectives, then one realizes that while one has societal duties in the form of maintaining the social order which allows for resolution of conflicts between individual moral perspectives, one also has a duty to ensure that the societal laws, mores, traditions are such that they upheld this rules and regulations that are best suited to the human condition. One not only has duties, one also has rights that one can expect from the social fabric. Here one may play with different social values before coming up with a set of values that one deems are amenable to making most interactions viewable from a neutral perspective. One discovers one’s moral self and takes activism other measures to ensure that ones moral sense is inline with external social fabric in which one lives.

Selman himself has compared his work to Kohlberg’s stages. I don’t have access to the article, but others may find it interesting.

More later on the qualitatively different 6, 7, 8 stages. (which I’ll have to work out from thin air!)

1 thought on “Development of Perspective Taking : a pre-requisite for different stages of Moral Development”