While my original post regarding the two cultures of Schizophrenia and Autism was a reference to the Arts and Science cultures of CP Snow, this post is about the cultures in the traditional sense- the American culture pitted against the East Asian culture.

To recap the differences in Autism and Schizophrenia, the difference could be summarized as a linear, literal, realistic, detail-oriented and routine -bound thinking style in Autism and a non-linear(parallel), metaphorical, imaginative, meaning-oriented and novelty preferring thinking style associated with schizophrenia. One of the prime reasons for these differences was hypothesized to be a central coherence tendency in autism (too much focus on foreground and piece-meal perception/ conception) on the one hand and a contextual, broad and loose association tendency in schizophrenia (too much focus on background and a gestalt and holistic sort of perception/ conception) on the other hand.

One can even go a step ahead and characterize the autistic cognitive style as Analytical and the schizophrenic style as Holistic in nature.

This cross-cultural differences in cognitive style, as popularized by Richard Nisbett’?s book The Geography of Thought, has been found to be displayed in perception ( differences exist in change-blindness based on foreground/background salience and this also correlates with the differential patterns of eye fixations on background/foreground in the two cultures) , in categorization and representations(with either a style based on ecological or habitat-based thinking dominant or a one based on narrow self focus and goal-directed thinking dominant), in thinking (analytic vs holistic thinking), in reasoning about causes ( limited, direct causes vs. a large number of indirect causes) and recently in reasoning about consequences ( with western culture favoring a more direct consequence on an immediately succeeding event and the eastern cultures favoring more indirect consequences on more futuristic events and event effects on the the ultimate outcome).

Various theories have been proposed for these differences including a fear of isolation theory that posits that difference in dialectical vs analytical thinking or the reliance on context for memory recognition is due to the fear of social ostracizing, which causes one to focus more on context; a complex and ambiguous physical environment theory which in a roundabout (and in my view in a flawed) way argues that differences in complexity and ambiguity of towns and city scenes of the two cultures cause the different thinking styles rather than it being the other way round; to this being due to linguistic effects (just like this study which shows that linguistic differences cause changes in spatial cognition, I’m sure there are studies that attribute the different cognitive styles to linguistic effect) or due to genetic differences. 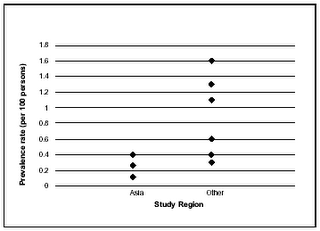 Consistent with this cultural trend, one can predict that in cultures which favor divergent, contextual and holistic thinking , a schizotypal subject would be less susceptible to be labeled as a mentally ill person. These cultures would be more tolerant of this form of thinking and more accommodating of the extreme manifestation. consequently one can hypothesize that in East Asian cultures the incidence and prevalence of Schizophrenia would be way below that in American cultures. This is actually the case with lifetime prevalence in Asian countries being 0.25 as opposed to 0.88 for non-Asian countries.

A reverse trend would be expected in Autism, with American children being diagnosed with autism lesser than the Asian cultures. The results for this prediction are not that optimistic as data on autism prevalence in china is not readily available; but Japanese show an upward trend, while American incidence levels seem to have actually decreased over the years.

Thus, it may actually be the case that autism and schizophrenia signify the Two Cultures.

Before I part, just a parting note on the recently discovered Television and Autism linkage. John Hawks, had commented on the eye movement cultural differences study and in its context had hypothesized that the reason for differences in cognitive style with Americans focusing on the foreground object may be due to the high prevalence in America of cartoon TV viewing which causes one to focus on a one moving object, against a static background.

But let’s consider what some of those cultural reasons might be. For example, have American graduate students watched cheaply-animated cartoons for a greater proportion of their lives. You know, the kind of cartoon where the only moving object is the main character, and the background is entirely static for minutes? For that matter, does television viewing in general affect attention.

To me this hypothesis of TV-cartoon viewing and the consequent figure-focus or central coherence seems very promising and might be the reason as to why Autism is rising with increased TV viewings.

2 thoughts on “The Two Cultures continued”