There is a new study in PLOS One that argues that we make reality-fictional distinction on the basis of how personally relevant the event in question is. To be fair, the study focuses on fictional, famous or familiar (friends and family) entities like Cinderella, Obama or our mother and based on the fact that these are arranged in increasing order of personal relevance, as well as represent fictional and real characters, tries to show that one of the means by which we try to distinguish fictional from real characters is by the degree of personal relevance these characters are able to invoke in us.

The authors build upon their previous work that showed that amPFC(anterior medial prefrontal cortex) and PCC (Posterior Cingulate cortex), which are part of the default brain network, are differentially recruited when people are exposed to contexts involving real as opposed to fictional entities. From this neural correlate of the regions involved in distinguishing fiction from reality, and from the known functions of these brain regions in self-referential thinking and autobiographical memory retrieval, the authors hypothesized that the reality-fictional distinction may be mediated by the relevance to self and this difference in self-relevance leads to differential engagement of these brain areas. I quote form the paper:

These findings were intriguing for two reasons. First, the identified brain areas have been previously implicated in self-referential thinking and autobiographical memory retrieval. This suggested that information about real people, in contrast to fictional characters, may be coded in a manner that leads to the triggering of automatic self-referential and autobiographical processing. This led to the hypothesis that information about real people may be coded in more personally relevant terms than that of fictional characters. We do, after all, occupy a common social world and have a wider range of associations in relation to famous people. These may be spontaneously triggered and processed further when reading about them. A logical extension of this premise would be that explicitly self-relevant information should therefore elicit such processing to an even greater extent.

To study the above hypothesis they used an experimental study that used behavioral measures like reaction time, correctness and perceived difficulty of judging propositions involving fictional, famous and close entities. Meanwhile they also measured , using fMRI, the differential recruitment of brain areas as the subjects performed under the different entity conditions. The experimental design is best summarized by having a look at the below figure. 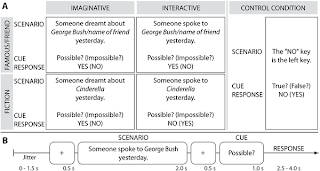 What they found was that for the control condition and the fictional condition the reaction time , correctness and perceived difficulty associated with the proposition was signifciantkly different (lower RT, lower correctness and more perceived difficulty) than for the famous and friend entities condition. Thus, from the behavioral data is was apparent that real characters were judged faster , accurately and more easily than fictional characters. The FMRI data showed that , as hypothesiszed, amPFC and PCC were recruited significantly more in personal relevance contexts and showed a gradient in the expected direction. The below figure should summariz the findings: 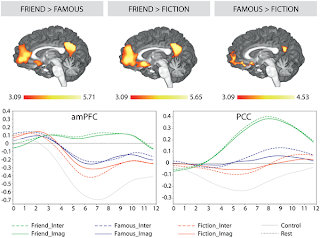 The amPFC and PCC regions are known to be commonly engaged during autobiographical and episodic memory retrieval as well as during self-referential processing. Regarding their specific roles, there is evidence indicating that amPFC is comparatively more selective for self-referential processing whereas the PCC/RSC is more selective for episodic memory retrieval . The results of the present study contribute to the understanding of processes implemented in these regions by showing that the demands on autobiographical retrieval processes and self-referential mentation are affected by the degree of personal relevance associated with a processed scenario. It should additionally be noted that the extension of the activations in anterior and ventral PFC regions into subgenual cingulate areas indicates that the degree of personal relevance also modulated responsiveness in affective or emotional regions of the brain .

Here is what the authors have to say about the wider ramifications:

That core regions of the brain’s default network are spontaneously modulated by the degree of stimulus-associated personal relevance is a consequential finding for two reasons. Firstly, the findings suggest that one of the factors that guide our implicit knowledge of what is real and unreal is the degree of coded personal relevance associated with a particular entity/character representation.

I would say that there are other broader implications. First it is important to note that phenomenologically, Schizophrenia/psychosis is charachterized by an inability to distinguish reality from fiction. What is fictious also starts seeming real. A putative mechanism of why even fictional things start assuming ‘real’ dimensions may be the attribution of personal relevance or significance to those fictional entities. If something, even though fictional in nature, become highly personally relevant, then it would be easier to treat it as real. What ties things together is the fact that the default brain network is indeed overactive in the schizophrenics. If the PCC and amPFC are hyperactive, no wonder even fictional entities would be attributed personal relevance and incorporated into reality. I had earlier too discussed the delusions of reference with respect to default network hyperactivity in shizophrenics and this can be easily extended to now account for the loss of contact with reality , with the relevance and reality linkage in place. when everything is self relevant everything is real.

As always I am excited and would like some experiments done with schizophrnics/scizotypals using the same experimental paradigm and finding whether there is significant differences in the behavioral measures between controls and subjects and whether that is mediated by differential engagement of the default brain network. In autistics of course I hypothesize the opposite effects.

Needless to say I am grateful to Neuronarrative for reporting on this and helping me make one more puzzle piece fit in place.

1 thought on “Self relevance and the reality-fictional blur”