I have blogged extensively about the Autism and Schizophrenia as opposites on a continuum theory. I remember first putting this theory in words in an article 3 yrs back on the mouse trap titled Autism and Schizophrenia: the two cultures. That 2006 article, in turn, was inspired by Daniel Nettle’s 2005 article in Journal of Research in Personality where Nettle had also proposed the dichotomy and that paper helped crystallize my thoughts on the subject, a theory which I had been building on my own and now supported by someone like Nettle who I respect a lot. Important to note that at that time I was blissfully unaware of Badcock or Crespi and their work. It is to the credit of Badcock that he had published in 2006 his own theory of Autism and Schizophrenia as opposites on a continuum based on parental imprinting of genes and proposed a mechanism. Crespi I guess got involved in Badcocks’s efforts later on and gave it more experimental and theoretic grounding. I firts became aware of Badcock and Crespi’s work in early 2008.

The wider world became aware of the Autism/Schizophrenia dichotomy sometime in late 2008 (November 2008) . at that time too, I was a little disappointed because most of the coverage did not mention Daniel Nettle, who I think should be credited for this work and line of reasoning too. As a consolation, some reports did mention Chris Frith who has also been partly supporting the thesis.

I wanted to give a historical perspective, because I am sure the recent Crespi article would be grabbed on by mainstream media and the pioneers Chris Frith/Nettle perhaps overlooked- but to me they too are heroes for having come up with such profound early insights. this is not to discredit teh work of Badcock and Crespi- they are doing a thorough job of convincing the skeptics and delineating the exact mechanism and genetics involved.

While we are on the topic of historical perspective , let me also pat myself on the back. In May 2008, a study came out that de novo Copy Number Variations’s (CNVs) were quite high in schizophrenics and they are in the same region as that for autistics who also have high CNVs in the same region. While some took that result to imply that Schizophrenia and Autism are same and are not different, I persisted and proposed a mechanism, whereby they could still be opposites : To quote:

Now as it happens previous research has also found that CNVs are also found to a higher extent in autistics. Moreover, research has indicated that the same chromosomal regions have CNVs in both Autism and Schizophrenia. To me this is exciting news. Probably the chromosomal region (neurexin related is one such region) commonly involved in both schizophrenia and autism is related to cognitive style, creativity and social thinking. Qualitatively (deletions as opposed to duplications) and quantitatively (more duplications) different type of CNVs may lead to differential eruption of either Schizophrenia or Autism as the same underlying neural circuit gets affected due to CNVs, though in a different qualitative and quantitative way.

Now one and half year later Crespi et al report the results of their study which has found exactly the same- that is, if deletions in some locus lead to autism, duplications lead to schizophrenia and vice versa. That to me is clinching evidence of my thesis. Who says Science does not happen on blogs- I proposed something to flow as a consequence of theory and exactly the same thing is found as per the hypothesis. I feel vindicated and emotional to some extent. Loves labor has not been lost to deaf ears.

Let us then return to the new and latest study that has sort of proven that Autism and Schizophrenia are opposites, genetically. Crespi et al, report in the latest PNAS edition that comparative genomics leads to that conclusion. What Crespi et al did was look at theCNV s and the locus whee CNV in both Autism and Schizophrenia are involved and sure enough they found the pattern I had proposed. I’ll now quote from the abstract and the article extensively: 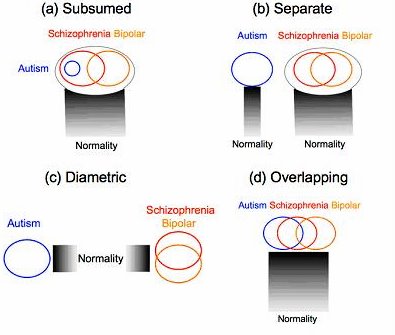 I cannot cut n paste the table, but a look at the table clears all doubts. They also look at gene association data and come to a similar conclusion ruling out model A (autism, subsumed in schizophrenia) or model B (autism and schizophrenia are independent of each other).

Models 1C (diametric) and 1D (overlapping) both predict broad overlap in risk genes between autism and schizophrenia, and do not necessarily predict an absence or paucity of genes affecting one condition but not the other. In theory, these models can be differentiated by using data on specific risk alleles for specific loci (such as single-nucleotide polymorphisms, haplotypes, or genotypes), which should be partially shared under the overlapping model but different under the diametric model. For the genes DAO, DISC1, GRIK2, GSTM1, and MTHFR, the same allele, genotype, or haplotype was associated with both autism and schizophrenia, and for the genes AHI1, APOE, DRD1, FOXP2, HLA-DRB1, and SHANK3, alternative alleles, genotypes, or haplotypes at the same loci appear to mediate risk of these two conditions (SI Text). For the other genes that have been associated with both conditions, heterogeneity in the genetic markers used, heterogeneity among results from multiple studies of the same genes, and the general lack of functional information preclude interpretation in terms of shared or alternative risk factors.

I am more than pleased with these results. Badcock too is. You can read his comments here. What about you? What would it take to convince you? 🙂

4 thoughts on “Autism and Schizophrenia: proof from comparative genomics”