Happiness may lead to mood-congruent effects of increasing trust(a positive emotion itself) in interpersonal situations;  an alternative theory is that happiness leads to top-down processing , thus relying more on activated schema , stereotypes etc and thus leading to more trust when trust schema or cues are salient and distrust when untrustworthy schema / cues are active.

As per the mood-congruent theory of effect of happiness, surmised that happy people would be more trusting and there would be a main effect of happiness manipulation on trust in experimental settings.  As per the assimilation-accommodation theory, viz that happiness leads to assimilation or use of existing constructs (stereotype./ schema etc) while sadness leads to accommodation or bottom-up processing whereby new constructs may be created, the conjecture is that happy people will show trust in trust situations and distrust in distrust situations and thus there would be an interaction effect in 2 (happiness/ neutral mood) x 2 (trust/distrust situation, stereotype or cue) study design.

These above two are competing hypothesis that make measurable and clearly different and distinguishable predictions and can be easily experimentally verified.

Robert Lount, Jr. set out to investigate precisely this piece of puzzle and his data supported the thesis that there is an interaction effect of mood on trust cues and thus happy people are more gullible  when trust cues/stereotypes are active; and also more paranoid or distrusting when distrust cues/ schema are active.

He performed a total of 5 different experiments to cement his thesis. 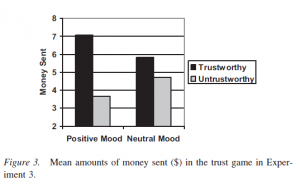 Here are the conclusions from the study:

The results in this article are consistent with work demonstrating that a positive mood increases reliance upon stereotypes (Bless, Schwarz, & Wieland, 1996; Bodenhausen et al., 1994; Park & Banaji, 2000) and scripts in interdependent situations (Hertel et al., 2000). More pointedly, the findings from all five experiments supported the predictions of the accommodation–assimilation model (see Bless & Fiedler, 2006; Fiedler, 2001b, for reviews) over mood-congruency models. This leads to a fairly strong conclusion that the relationship between positive mood and trust depends, in large part, on available schemas, cues, and stereotypes.

To me the evidence is as good as it needs to be. It also fits in my broader context of seeing good/happy mood  as a precursor to mania whereby happiness leads to use of stereotypes/schema , leads to becoming more gullible/ paranoid / leading to psychoses.  although the present study did not had anything to say about sad mood (the contrast was with neutral mood) it is not unreasonable to extrapolate and claim that sad people are more realistic and depend on behavior of the other party rather than stereotypes to ascertain in whom to place their trust. this too fits in the broader scheme of things where sad mood is  a precursor to depression which has been shown to make people more realistic. If there is an upside to depression, the only one may be that it makes us more realistic/ rational.

1 thought on “Am happy, will be paranoid/ gullible; am sad, will be realistic”