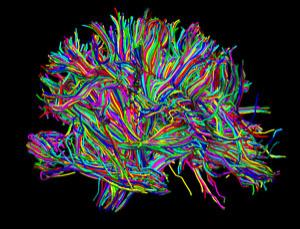 I have been following, and am passionate about, the positive psychology movement for quite some time, but was surprised to discover that there was something called positive neuroscience also in place. I recently came across this new scientist article about the research paper of Rex Jung et al and was pleased to discover that Jung was working on the frontier of applying latest in neuroscience research to Positive brain states and substrates like that involved in creativity.

The article is in PLOSOne, an open access journal and is lucidly written , so you should go and read it now. I’ll anyway like to summarize their study results. First a bit of background about creativity psychopathology linkage.

Some research reports positive correlations between various definitions of creativity and a diagnosis of psychopathology [1], [2], [3], [4]. Other studies report that psychopathology is rarely, if ever, associated with creative insight, capacity, or productivity [5]. When artists are studied more carefully, certain personality characteristics appear to reside upon a continuum of both normal behavior and psychopathology. For example, creative expression in the visual arts and poetry has been linked with the overlapping personality traits of schizotypy and Openness to Experience (Openness), and particularly to self-reports of “unusual experiences” and “unconventional nonconformity”, but not the “introvertive anhedonia” characteristic of schizophrenia [6].

This is inline with what we have been covering at mouse trap regarding association of creativity with the psychotic spectrum especially the creativity that is artistic or revolutionary in nature rather than scientific and methodical in nature. This is how the authors distinguish between types of creativity inline with my views that one type of creativity is autistic (cognitive) in nature while the other is psychotic (emotional) and these are on a continuum.

First, there does not exist one “creativity”; rather, this construct is hypothesized to reside upon a continuum between cognitive (i.e., scientific) and emotional (i.e., artistic) behavioral domains [41], [42]. Thus, when comparing scientists and artists directly, researchers have found lower lifetime rates of psychopathology for: 1) scientists compared to artists, 2) natural scientists compared to social scientists, 3) nonfiction writers compared to fiction writers and poets, and 4) formal artists compared to “expressive” artists [3], [4], [43]. These findings have led researchers to hypothesize a hierarchical structure of creativity across disciplines [42], which echoes the notions of “paradigmatic” (i.e., a fundamental model of events) versus “revolutionary” (i.e., rejection of doctrines) approaches as applied to the sciences [44]. The benefits of working within the lines of a given field appear to be lower levels of psychopathology; alternately, individuals with lower levels of psychopathology may be attracted to such endeavors. Similarly, there is increasing evidence that the cost of “revolutionary” approaches to creative endeavors, whether it is in the arts or sciences, may be associated with increased levels of psychopathology although, again, causative links are weak at best.

So that fits in with broader creativity/ psychopathology linkage, but to get back to the current study the authors had already established earlier that performance on Divergent Thinking (DT) (a measure of creativity) “exhibited significant inverse relationships with both cortical thickness in frontal lobe regions and metabolite concentration of N-acetyl-aspartate (NAA) in the anterior cingulate cortex in normal young subjects “. Thus, some theoretical relationship between creativity and underlying brain circuitry in the frontal reagion was available a priori. Also, research by other researchers has already established that ” Both schizophrenic and bipolar patients have been shown to have reduced fractional anisotropy (FA) in the anterior thalamic radiation [12], [13] and uncinate fasciculus [14] within frontal brain regions. Similarly, reduced FA was observed within the uncinate fasciculus of a cohort with schizotypal personality disorder, providing strong support for the hypothesis that similar neural phenotypes may not result in full-blown clinical symptoms [15]. Finally, in normal subjects, the Neuroregulin-1 (NRG1) single nucleotide polymorphisms (SNP’s) SNP8NRG243177 and SNP8NRG221533 were found to predict lower FA in the left anterior thalamic radiation [16]. As NRG1 has been found to predict higher risk of schizophrenia [17], [18] and bipolar disorder [19], and is linked with axonal myelination and migration [20], these authors hypothesize a mechanistic link between NRG1 within the anterior thalamic radiation and risk for psychotic disorders [16].” 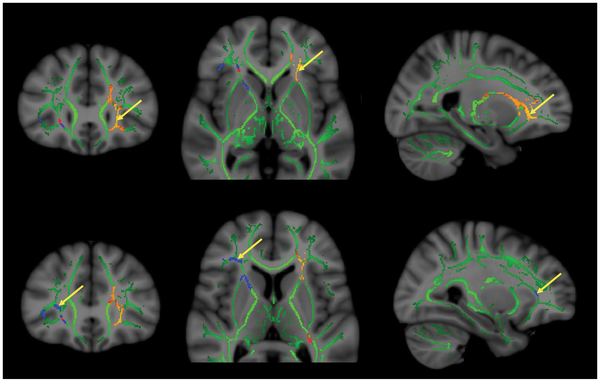 One can speculate that frontal region, more concerned with executive control , when with reduced activity or functional connectivity , may not inhibit the other brain regions that much, and may thus lead to flowering of inherent creativity and cross-talk amongst different brain regions. On the other hand too much white matter/ gray matter in this region may lead to too much control and leave little room for flexibility and creativity.