I’ve written about the relation between personality and emotion from my perspective, but was gladdened when I found Scherer has written on the matter in a very eloquent and apt manner. To quote from him and Revelle:

Personality is the coherent patterning of affect, behavior, cognition, and desires (goals) over time and space. Just as a full blown emotion represents an integration of feeling, action, appraisal and wants at a particular time and location so does personality represent integration over time and space of these components (Ortony et al., 2005). A helpful analogy is to consider that personality is to emotion as climate is to weather. That is, what one expects is personality, what one observes at any particular moment is emotion.

It is important to note that personality/emotion definition has been expanded to include cognition as well as affect; behavior as well as motivation (desires). Traditionally emotions are seen as affective (feeling) in nature but we know that emotional states have different cognitive underpinnings and can affect cognition in subtle and not-so-subtle ways. Similarly though emotions may be more closely related to motivational issues (desires etc) they are also manifested in overt behavioral tendencies. some are energizing while others are calming/soothing.

In one of the last emotion/personality post , I referred to the dimensional emotional model of PAD (Pleasure-Arousal-dominance) as proposed by Meherbain. It is apt to note here that pleasure (pleasantness/unpleasantness) dimension is very much related to affect i.e. subjective feeling or how the emotion is subjectively felt. Also Arousal (Ready/Relaxed) is construct very much related to behavior or action tendencies. Some emotions lead to more vigorous, ready and active engagement with the environment as compared to others wherein one may be relaxed. Similarly Dominance (control/lack of control) is a motivational emotional dimension reflecting whether one wants to control and be in control or be dominated/ lose control in a particular situation.

That leaves us with cognition/appraisals dimension of emotions, but before we get onto that let us revisit the four evolutionary stages of Millon and how opposites on each stage lead to personality variations and disorders. The parallel with emotions will be self-evident.

The first stage is that of Existence and the polarity is of pain/pleasure: again an affective dimension/stage. Stability or life-preservation is coded by predominant disposition towards avoiding feelings of pain- a pain sensitive phenotype; Enhancing or life-enhancement is coded by predominant disposition towards felling pleasure a pleasure sensitive phenotype.

The second stage is that of Adaptation and the polarity is of active-passive: again a behaviorally defined dimension/stage. Modifying the environment to suit ones need is an active strategy, while passively accommodating to environmental niches is the passive strategy. both are defined behaviorally and the actual actions/behavioral tendencies define the personality type.

The third stage of Millon is that of Replication and the polarities are that of Self and Other: this is particularly a motivational dimension…whether one is motivated by selfishness and focus on oneself or by concern for others and selflessness too. There is polarity and tension between self-actualization tendencies and wants and other-nurturing motivational disposition. If focus is on self one would tend to dominate others, if focus is on others one would be willing to become vulnerable and submissive.

The fourth stage of Millon, that he does not relate to personality, but which I find integral to my theory is that of Abstraction and the polarity of information gathering versus information selection/transformation. I call the polarity Broad Versus Narrow and it is reflected in whether one is creative or is rigid and inflexible in thinking, , but the important point to note is that a cognitive dimension has been added to personality at the fourth stage.

Which brings us back to the (missing) cognitive dimension of emotions. I would have gladly taken the credit of discovering/proposing such a cognitive dimension, but it seems I was beaten to the game by Fontaine et al who made the bold statement :“The World of Emotions Is Not Two-Dimensional”. 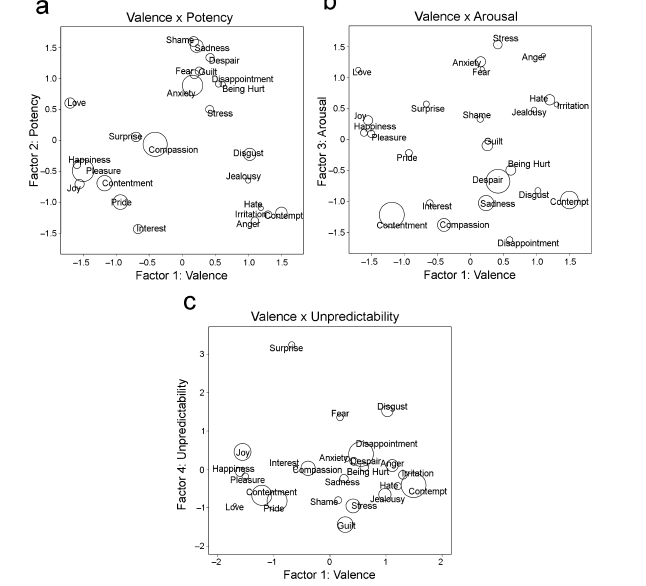 Note that the first three dimensions are similar to PAD while the fourth dimension is cognitive(appraisal) in nature- predictability vs unpredictability or certainty vs uncertainty in the appraisal of the situation. this ca be reasonably related to Broad Vs Narrow last stage of Abstraction i.e. whether one is cognitively open to new situations or appraisals or closed to them.

So the relationship between emotions and personality is more or less clear to my naive mind as of now. Of course I’m leaving some parts for the next post that will extend this and correlate with the eight stage process.

For now I’ll like to end with the excellent Scherer et al article quote:

In that personality represents the integration over time of feelings, actions, thoughts and desires, theoretical developments in personality benefit from a greater understanding of emotional processes. At the same time, research in emotion can take advantage of individual differences in sensitivities to situational cues and predispositions to emotional states. The questions of why some people become angry, while others become frightened or depressed in response to threats, and why some become elated while others seem unaffected when given rewards will be better understood by jointly studying the problem of long term coherence (personality) with short term fluctuations in affect, behavior, cognition and desire (emotion).

6 thoughts on “Personality and emotion: take 4”