In my last post I introduced the mouse trap readers to ICNs , ICA and the rs-fcMRI (resting state Functional connectivity fMRI) procedure that is used to detect such networks. This post extends that exciting line of work by commenting on 3 papers that list the ICNs found in the developing brain (infant, child , adolescent, adult).

What is important to recognize, and might not be so evident, at the outset, is that these ICNs change over developmental time course both in number and their topology (i.e. their constituent parts) . For eg. in last post I hinted that these ICNs range from 5 in infants to up-to 16 in adults. That figure of 5, was based on this paper by Franssson et al that found that there were 5 ICNs in infants. The accompanying figure shows these networks (I presume ordered by the amount of variance that each component explains) and the textual description (from the abstract) is as follows:

We found five unique resting-states networks in the infant brain that encompassed the primary visual cortex, bilateral sensorimotor areas, bilateral auditory cortex, a network including the precuneus area, lateral parietal cortex, and the cerebellum as well as an anterior network that incorporated the medial and dorsolateral prefrontal cortex.

To me the networks seem to be made-to-order to fit the five/eight stage evo-devo model that I have been championing. The functional networks/stages thus can be labelled as :
1.  Sensory (Visual cortex/occipital lobe)

4.  Language/Spatial (depending on lateralization and hemisphere)  (sup. parietal , cerebellum)

It is apt to pause here and reiterate that these 5 are what are found in infants and come pre-wired; as one grows one makes changes to these functional networks and adds new networks. also these networks do not look the same as that found in adults- the major difference being that in children/infants anatomically near areas also are part of a functional network; while as we grow, presumably based on the fact that other areas are also recruited over developmental time frame, the network gets more distributed and anatomically distant regions also become apart of the intitial local network.

That brings us to our next elegant and beautifully written open-access study that shows how a ‘local’ organization in childhood changes to a distributed organization in adulthood, for the functional networks,  while still retaining small-world properties.

For analysis and comparison purposes , the authors chose to focus on 3 well-known and another lesser well-known ICN that is found in adult brain- the 3 well-known being Default Mode Network ( DMN) , 2 task related networks –  a fronto-parietal network that to me seems like Executive control network (ECN)  and a cingulo-opercular network that to me seems like a Salience network (SAL) and the other lesser well0known ICN centered around Cerebellum (CER) activity. 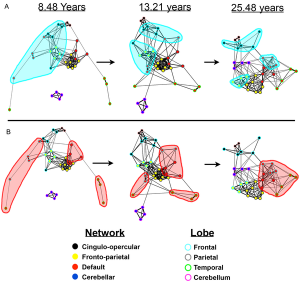 It is not important which ICNs they chose to study , what is important is the results that they found. They basically  found that in children the regions of interest belonging to the ICNs  are more closely clustered around anatomical locations like the lobes; but in later adulthood they cluster as per functional network i.e. ICN  . This becomes evident if we look at the accompanying figure. The blue shaded region shows all nodes belonging to frontal lobe – they are clustered together in children, but segregate as we move to adulthood (top part of figure A); in contrats the lower part of figure (B) shows the pink shaded cluster that is grouping the DMN regions of interest. We can visually see that in children the DMN areas are not clustered together functionally , but over time they get clustered in a tight network.

Finally, a third study that used grey matter based structural covariance of functional networks came to the same conclusion that some networks grow and develop and change their topology over time.

To me the above looks promising.The new technique of rs-fcMRI heralds new insight into the brain structure and function. In the next post we will look more closely on the main ICNs found in adult human brain.  Stay tuned.

fMRI has become an important investigation and research tool in trying to locate neural correlates of a function X,Y,Z in the brain. However notwithstanding the allure of seductive neuroscan images, fMRI studies at times leaves us as clueless about the brain and its organization as we were before the studies were conducted.

However , just like plain vanilla structural MRI coupled with BOLD signal analysis had led to  fMRI, which was a step forward; the plain vanilla FMRI coupled with resting-state BOLD signal spontaneous fluctuations has led to resting state connectivity fMRI, also called rsc-fMRI, which is another step forward and does not juts enable us to pinpoint a function to a brain, but rather reveals the intrinsic organization of brain by revealing tightly coupled functional neural networks in the brain.

Let us take a step back to look at rsc-fMRI in detail. Basically it has been shown that the brain is never at rest, and at rest too, there are spontaneous fluctuations in the brain (of BOLD signal say in the case of fMRI). It is theorized that those brain areas that how correlated spontaneous fluctuations at rest are part of a functional network and this has been shown to be true by looking at the functional maps so revealed and looking at actual anatomical connectivity, and the circuit involvement in related tasks that the circuit is supposed to be involved in.

While to many people resting state fMRI brings to mind the Default Mode Network ,about which I have blogged before, at rest other brain functional circuits also show correlated spontaneous activity (one theory is that they show spontaneous activity so that important synaptic connections in the network can continue to remain in absence of external input/processing) and looking at such correlate activity one can discern that the regions involved  form a functional network.

What is more rsc-fMRI is easy to administer, especially to populations like infants, demented people etc, who may not be able to participate in task-based fMRI studies because of their inability to execute a given task. rs-cfMRI on the other hand requires nothing much excpet lying down quietly in the scanner. The BOLD spontaneous fluctuations, from multiple subjects,  are then analyzed using Independent Component Analysis (something like PCA or factor analysis that psychologists use in say personality traits studies) and the number as well as the regions involved in different function neural networks are thus revealed. the function networks thus revealed are called ICNs or Intrinsic Connectivity Networks.

Basic ICNs in humans range form 5 in infants  to upto 16 in adults and though that seems like a vast range there seem to be good test-retest reliability and replicablity of basic ICNs found across the studies.  Some of the variation seems to be an artifact of developmental maturation of ICNs over time.

I believe these ICNs can be arranged as per the eight stage model and the ACD model and also they have great significances for many psychiatric and neurodegenerative disorders; but for that you have to wait for the subsequent posts.

Marcus Raichle, who had initially discovered the default brain network, has a new review article in TICS, that argues that brain activity should be understood as primarily an intrinsic and proactive process rather than a reflexive or reactive process.

He bases this argument on the fact that resting brain consumes 20 % of body’s energy requirements , but this is the consumption of default mode network within the brain. If the brain is engaged in some task than energy consumption does not increase by more than 5 %. thus the meat of  the brain energy is consumed for DMN and is used for intrinsic functions , not directly related to task demands.

In an experimental setting, it is very easy to be lured by the task related fMRI activity or ERP’s as they reflect responses of brain to carefully controlled variables in lab settings; however one should not lose sight of the fact that the apparent noise and random intrinsic activity is there for a purpose and may sound mysterious as it may be correlated more to spontaneous activity rather than directly mappable to measurable environmental variables.

Another argument Raichle gives relates to the visual system.  Here the input from Retina is highly degraded (from 10 to the power of 10 bits per sec to 100 bits per sec that is supposed to be bandwidth for conscious processing) and Marcus argues that the anatomy of cortex with may feedback connection from higher cortical areas suggests that much of the activity is predictive in nature trying to fit the reduced environmental input to a rich internal representation. Of course Jeff Hawkins and others have been similarly arguing for a more predictive role of the entire cortex, rather than a reactive and information processing role as is traditionally assumed.

He then goes on to argue that the coherence observed in the spontaneous fluctuations in fMRI BOLD signals , especially in the DMN are reflective of more than daydreaming or mind wandering and this intrinsic activity needs investigation as it is present even in non-conscious states. He also posits that these spontaneous fluctuations representing intrinsic activity lead to behavioral variability and I am somehow reminded of Bjorn Brembs (@brembs) paper on flies and how they showed spontaneous behavioral fluctuations…if only one could identify the DMN in flies and monitor its fluctuations using an fMRI machine:-) , one would have hard data to prove Rachelle’s claim.

He does relate spontaneous fluctuations in BOLD signal to slow cortical potentials (SCP) and the SCP’s to cortical excitability and stakes a claim that thus spontaneous fluctuations measure the degree to which cortical neurons are ready to be fired. this provides a handle by which we can investigate how and what function the intrinsic activity serves (answer: the phase of SCPs codes and predicts the most probable signal timing from the external world). the brain is in a constant flux between trying to predict and looking for novel stuff.

That brings me to Linas and his book I of the Vortex. I have only read it partially but was fairly impressed by its argument for the primacy of motoricity. I encourage readers to read that book for an alternative view from the sensory and perception driven psychology and neuroscience mainstream approach. I firmly believe that we re primarily motor creatures rather than sensory ones and more clues could be found about us suing the motor approach to cognition/ consciousness/ whatever.