A new and important research paper by Ed Diener et al has been recently published in JPSP and you should read the paper in full by requesting reprint using this page (this is how I got access to the paper) . It is very lucidly written and bears upon an important question: can money buy us happiness and if so to what extent and of what kind?

The research paper itself is a result of a till-to-the-date largest Gallup survey of people in diverse countries and covering a large set of people that is a fairly representative sample.

At the outset, Deiner et al differentiate between different types of well-being. Astute and regular readers of this blog will remember the distinction between positive and negative emotions that was earlier highlighted with respect to health and well-being.

There we distinguished between positive emotions and negative emotions as belonging to different types of affective phenomenon (see also this post that distinguishes between the two) , but it is also important to distinguish affective from cognitive phenomenon.  while talking about happiness either we may be talking about the  positive affect we experienced recently; or the fact that we did not feel any negative affect recently; or we may be using cognitive evaluations of our overall satisfaction with life. Thus overall life satisfaction is a cognitive component of happiness and well being ; while presence of negative and positive emotions is an affective and hedonic component of our happiness measure.  In the past these measures were used interchangeably and without distinguishing from each pother and may have led to inconsistent or inconclusive results.

In this survey, the Diener et al group was interested in finding the effect of absolute individual income (taken on a log scale to take care of the fact that 10,000 rs for a person with 10,000 rs income mean much more than 10,000 rs to someone with income of 1,00,000 rs) , the relative (to others within the nation) individual  income, the average income of the nation under study (reflecting the societal infrastructure etc) on happiness and well being as measured by three dimensions (positive emotions, negative emotions and life satisfaction).  So they measured these variables and calculated their effects on the three measures of happiness and well being.

They were also interested in finding out whether money leads to happiness directly by fulfillment of basic physical needs or whether it does so via  a psychological process wherein getting more material goods (that are valued by society) leads to feelings of goal achievement and thus overall satisfaction with life. Thus they measured tow variables : an index measuring possession of material valued resources like computers, and another measuring satisfaction with standard of living.

The authors were also interested in psychosocial variables like social support (say friends and family that can be relied in case of emergency), sense of autonomy, mastery and control over situations where one can show competence and whether these had any effect on life satisfactions or positive and negative emotions.  Work in the past has suggested and theoretical models like Deci and Ryan’ s Self determination theory posit that meeting psychological needs like that for autonomy, competence and relationships should lead to well being and happiness. Thus they measured these psycho social variables too. 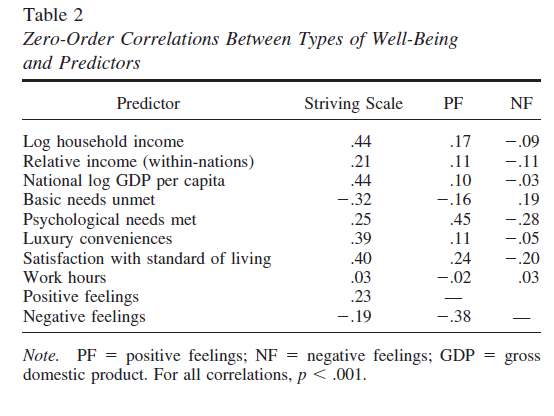 How these variables were operationalized and measured I’ll leave as task for the keen reader to read from the original paper. Here I present the major findings:

This is the take-home message from the paper:

Contrary to both those who say money is not associated with happiness and those who say that it is extremely important, we found that money is much more related to some forms of wellbeing than it is to others. Income is most strongly associated with the life evaluation form of well-being, which is a reflective judgment on people’s lives compared with what they want them to be. Although statistically significant, the association of income with positive and negative feelings was modest. Furthermore, we found that societal income has a substantial influence on life evaluations beyond the effects of personal income, indicating that it is very desirable for life satisfaction to live in an economically developed nation. However, we also discovered that social psychological prosperity is very important to positive feelings. Some nations that do well in economic terms do only modestly well in social psychological prosperity, and some nations that rank in the middle in economic development are stars when it comes to social psychological prosperity.
If replicated, our findings have profound implications for both psychological theories of well-being and for societal policies. At the theoretical level, our results indicate that different types of well-being can be influenced by very different predictors. It is important to note that social psychological well-being is shown to be an important correlate of feelings across the globe. At the policy level, our findings indicate that more than money is needed for quality of life, and the social psychological forms of prosperity correlate only moderately with economic development. This means that societies must pay careful attention to social and psychological variables, not simply to enlarging their economies. Our findings indicate that it is important for societies not only to measure economic variables but to measure social psychological well-being variables as well.

To me, the fact that increasing income can make you more satisfied with life and the fact that greater autonomy, mastery and relationships can make you feel more good, is a win-win situation where the happiness set-point or baseline is no longer a given, but by increasing psychosocial as well as traditional capital one can hope to increase one’s cognitive and affective happiness and well being. Pursuit of money need not be at loggerheads to pursuit of autonomy or mastery or better relationships; and if they are one will have to make appropriate trade-offs depending on whether one values more life satisfactions ( living in past and future) or positive feelings (living in presents). No choice is simple, but still there is choice and hope!