Essentially they found that in some regions/tracts there was greater Fractional Anisotropy (FA) as compared to controls. These regions/tracts were genu and body of the corpus callosum (CC), left superior longitudinal fasciculus (SLF) and right and left cingulum (Cg). They also found that in areas of high FA there was corresponding decrease in Radial diffusivity (Dr). What this essentially means, to my naive mind, is that greater conductance or speed of action potential in axons would primarily be due to enhanced myelination which reduces leakage or lateral flow of AP.

I’ll like to contrast the results with an earlier study I had blogged about regarding creativity, psychopathology and white matter mylienation connection. As per that study an inverse relation was found between people high on creativity (divergent type) and Fractional anisotropy in frontal regions, i’e there was low FA. Also importantly there was increased Dr (radial diffusivity) in the same regions and thus the conclusion was that there was reduced myelination in those areas which meant reduced signal transmission speed and more signal leak . It is notable that that study too used DTI and Tract based Spatial statistics (TBSS) analysis method to arrive at their conclusions. 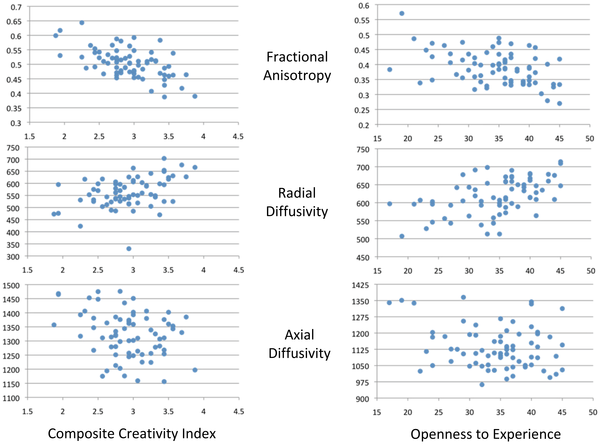 Regular readers of this blog will know my fanaticism for Autism and Psychosis as opposites on a continuum theory. This new paper nicely fits in with my last post linking creativity/psychosis and white matter/myelination, I had as much surmised that Autism would show the opposite effect and have high FA and decreased Dr. It is heartening to note when such a relation is found and reported- goes to show the strength and ability to make predictions of the theory.

However, I would also like to point out and highlight that I believe Autistic spectrum is characterized by another type of ability – the savantic intelligence– that may be directly due to this white matter /excess myelination effect. Perhaps the signals travel so fast that decisions are made locally without the time available to get other far-0off regions involved- thus giving attention to details but inability to link disparate regions and ideas.