I am currently reading ‘A life worth living‘ and found the introductory chapter by Mihaly Csikszentmihalyi quite stimulating and inspiring. 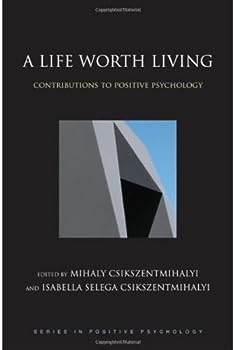 Selfishness and cruelty, which formerly existed mainly as tools for biological survival, now have become extended to protect the psychological needs of the self, for the metabrain cannot help but conclude that its own existence is the most precious thing in the world, and all other goals pale in importance compared to its preservation. The terror of nonexistence, the fear of death, has become one of the ruling motives of humans.

Paradoxically, self-reflection also ushers in the possibility of self-doubt. As humans realized that they were independent individuals with a short lifespan, the question of what choices would lead to a meaningful life became increasingly urgent.

The third reality and fear of isolation is also apparent from the dawning of self-reflective consciousness and a sense of individuality.

The realization of individuality brought about a sense of isolation and finitude, but it also gave the impression of autonomy and freedom.

For understanding the last existential reality and fear of meaninglessness, we need to understand how self-reflective consciousness makes us question the implicit meaning of living and makes us seek for external frames of meaning. For an (non self-reflective) animal, the question of whether life is worth living simply does not arise.

After all, if the spark of consciousness only lasts a few heartbeats in the cosmic darkness, is there really any point in hanging on to life, when so much of it involves suffering? To answer this question, our ancestors—freed and unmoored from the implicit meaning provided by biological existence—had to come up with credible reasons that life was indeed worth living. The myths, religions, and philosophies of every culture have been in large part directed toward answering that question.

With science and reductionist thinking eating up on any semblance of meaning we may derive from earlier systems like myth, religion etc its imperative to ground meaning in new secular and non-mystical terms.