I’ve written previously about Maslow’s motivational hierarchy and how that relates to the eight stage evo-devo model. Most people are familiar with the 5 motivational basic needs/motives theory of Maslow, but are not aware that he had later revised it to include eight basic needs/ motives.

A recent paper by Krenrick et al also discusses the more popular 5 motivational scheme of Maslow and revamps the model by dropping self-actualization at the top and making room for 3 reproduction related motives -mate attraction, mate retention and parenting.  Regular readers will note that this is inline with the eight stages discussed during life-history theory based perspectives on this blog.

This new paper, which is available in full on authors website, is an important contribution and gets many things right, though I believe that safety need should trump physiological needs and that we need an eighth motive/need which would be related to finding meaning/purpose/transcendence . 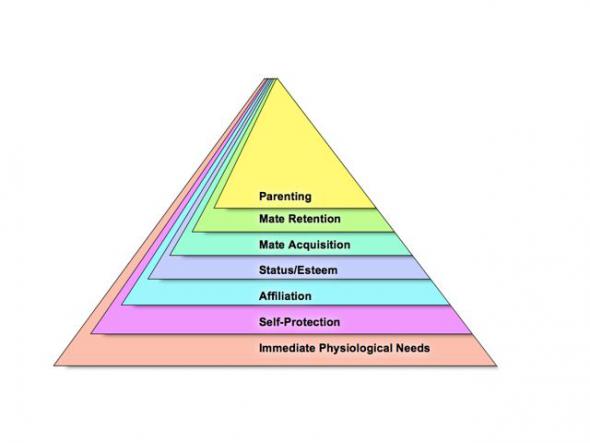 Anyway, lets first see what a motivational system is:

Throughout this article, we have used the terms needs, motives, and goals somewhat loosely. Our view of motivational systems follows that of evolutionary theorists such as Plutchik (1980) and Scott (1980), with connections to the views of the original evolutionary psychologists such as William James (1890) and McDougall (1908) and to Carver and Scheier’s (1998) cybernetic view. On that view, any motivational system includes (a) a template for recognizing a particular class of relevant environmental threats or opportunities, (b) inner motivational/ physiological states designed to mobilize relevant resources, (c) cognitive decision rules designed to analyze trade-offs inherent in various prepotent responses, and (d) a set of responses designed to respond to threats or opportunities represented by the environmental inputs (i.e., to achieve adaptive goals).

To elaborate, and link with the ABCD model of psychology, desire/motivation forms a big sub-domain of psychology,m but motivation.desire can itself be broken into 1)Affective components (a template for recognizing a particular class of relevant environmental threats or opportunities) 2) Behavioral components ( a set of responses designed to respond to threats or opportunities represented by the environmental inputs) 3) Cognitive components (cognitive decision rules designed to analyze trade-offs inherent in various prepotent responses) and 4) Desire / motivation proper ( inner motivational/ physiological states designed to mobilize relevant resources).

Kenrcik et al consider the evolutionary ,  developmental and proximate mechanisms and level of analysis and use that to refine the Maslow’s ladder and that makes sense and is more or less inline with the eight stage model.

They also refer to Deci and Ryan and their intrinsic motives and I like to think of deci and Ryan motives as well as addition to that by Daniel pink as follows: 1) autonomy (from genes) 2)  mastery (over environment) 3) Belongingness (to culture) and 4) Purpose ( of self) – these intrinsic drives again related to biology, environment, culture and phenomenology.  Only the last level of analysis need make a reference to consciousness; all prior levels are/may be non-conscious.  I believe the lack of phenomenological level of analysis is limiting and perhaps the reason they miss the eight and highest motive.

The authors, apart from adding new motives of mate attraction. mate retention and parenting, also stress the point that these are overlapping/ can be activated simultaneously and do not necessarily follow developmental stages.

The original article itself is accompanied by commentaries and Kenrick himself maintains a blog and has written a  couple of blog posts related to this, so there are no excuses for not reading up more on this.