It has been this blog’s thesis that autism and its milder form autism spectrum disorders (ASD) are diametrically opposed to psychosis and its milder form schizotypy.  In no area is this more apparent than in the perception or attribution of minds to others. It thus gave me immense pleasure to read this new article by Wegner et al that looks at how the perception of others’ mind is affected in different sub-clinical conditions like ASD, Schizotypy and Psychopathy.

Wegner et al review a great deal of literature to come to the conclusion that others’ mind perception is a two dimensional construct and that we typically attribute mind to an entity depending on whether the entity can experience like us and whether they have goals and agency like us. Thus people can differ in the perception of either Agency or Experience when they attribute mind to an entity. Also b reviewing the available literature they came to the hypothesis that ASD folks should attribute less of agency , but perhaps equal experience to other humans and other entities as compared to controls; Schizotypals on the other hand have been shown to attribute more of mind and in particular agency to other entities than human. They also hypothesized that owing to lack of empathy the psychoptahs might perceive all animals/humans as lacking experience and thus mind-deficient to an extent and subject to manipulation.

They used online surveys to ascertain scores on ASD, schizotypy and psychopathy and correlated that with mind perception and attribution inclinations.  How they assessed mind perception was by letting the subjects ascribe perceived experience and perceived agency to nine entities viz.  baby, dead woman, dog, God, man , robot, Superman, tree and woman. They performed a confirmatory factor analysis that confirmed that indeed mind perception has two components- Experience and agency. 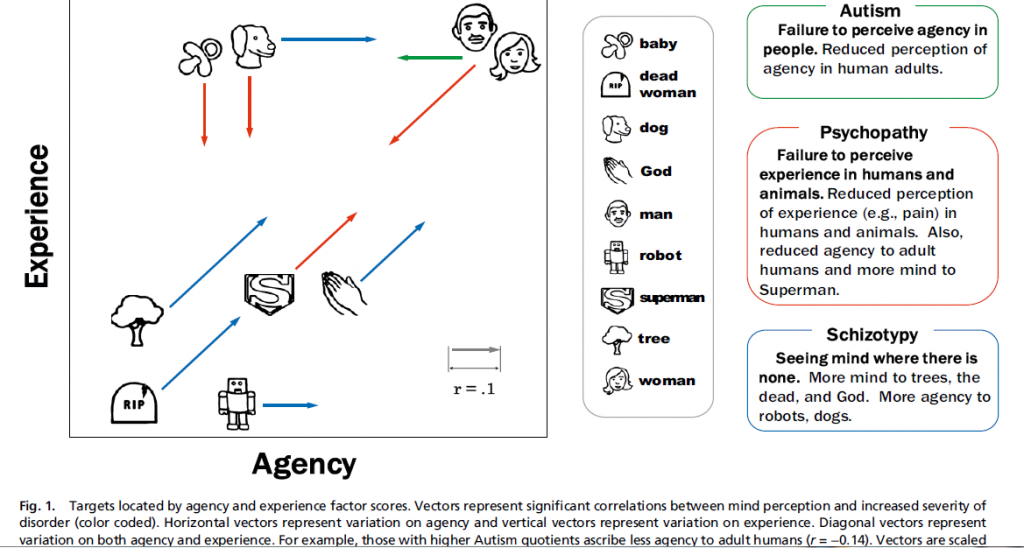 They got results in line with their hypothesis. ASD folks did  not differ in ascribing Experience to fellow humans but did differ in ascribing agency. Schizotypals on the other hand ascribed too much agency to Robots/animals etc; and in general attributing min dto even things like tress , god and dead woman. Psychopaths on the other hand showed reduced ascription of Experience to other humans as well as animals. As an interesting aside, psychopaths attributed more mind to superman perhaps self-identifying with the fictional character

Thus,  though mind perception in both ASD and Schizotypy is distorted it is tilted one way in autism and the other way in psychosis. With clinical populations the authors hope to get even stronger results. I am pleased because finally people have started taking the autism is opposed to psychosis paradigm seriously and have started doing research around it that is leading to fruitful results and confirmations.

Another new study that I came across recently and would like to link to found that VPA (valproic acid) treated mice were indeed an apt model of autism in mice and had the same brain correlates and signatures as in Autistic people. It is worth noting that VPA/sodium valproate is used to treat psychosis and I have pointed earlier too how this indicates that autism and psychosis are di\ametrically opposed. It is good that we are getting multiple confirmations of the important autism-psychosis opposition theory.

3 thoughts on “Mind perception of others: opposing effects of having Autism/Psychosis”